The Joy of a Ragchew!

There is nothing better, in my mind, in the Amateur Radio experience; than a good CW ragchew. I just had the immense pleasure of spending close to an hour in conversation with Craig, N8KMY who is up in north Michigan.

Craig was using his Kenwood TS-2000 at 30 Watts to a vertical; and I was feeding my G5RV a steady diet of 5 Watts from my K2. The conversation was like a breeze; gently bounding from topic to topic as the mood moved us.

The CW was excellent at a pace of about maybe 20 - 22 wpm and Craig's fist was excellent. I need a few more QSOs like this on a regular basis. They keep my fist sharp, my ear sharp, and my gray matter nimble. 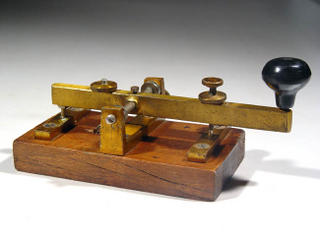 One of my goals for 2005 is to make at least one QRP QSO each day of this year. I had this goal in mind; and it became reinforced when the North American QRP CW Club offered it's "QSO a Day" award. So far, for every day this year, since January 1st, I have made at least on QRP CW QSO a day. Thus, MOCAD or Make One Contact A Day.

There have been days when it has been oh, so difficult. In early January and February there were a couple of days when we had mass coronal ejections so severe that the bands sounded totally and unequivocally dead. Even then, I still managed to eke out at least one QRP CW QSO a day.

Last week, however, was a challenge of a different color. Keeping my goal alive while going on vacation with my wife and kids to Lake George, NY. It would be a test of operating with QRP power on a portable basis with "compromise" antennas for the entire week.

We stayed at a great place, the Stepping Stones Resort in Diamond Point, NY. The place is owned and operated by a fantastic husband and wife team - Chuck and Ronnie. Chuck didn't even bat an eye when I set up my PAC-12 antenna on our parking apron in front of our cottage. In fact, some of our neighboring vacationers had relatives who are or were hams and they all took my portable operating in stride.

The goal was to make a QSO each day in as quick a fashion as possible; so as to maximize my vacation time with my wife and kids. It was definitely difficult, being in a situation where I wasn't really aware of the solar weather and how the bands were going to be. And once or twice, I really didn't think that I was going to make it. But each day, with either my PAC-12 or my Hamsticks magmounted to my Ford Explorer, I managed to get in a QSO or two.

20 and 40 Meters were the bands I decided to stick with; as they are usually the most reliable for me. On a couple of days, both bands were strangely quiet, devoid of any signals to speak of. The worst day was Wednesday, when I ended up working Bob KF4GDX. Bob and I have worked each other before; and our amazingly short QSO ended up being each of us telling each other how crappy the bands were! But a QSO, however short, is a QSO and I was mighty glad to be able to add it to the log.

I tried out several different strategies; and learned from each one. First, I tended to hunt on and around the FISTS watering hole frequencies. FISTS is a club with members who are dedicated to keeping Morse Code alive. They tend hang near the ".058" frequencies, such as 7.058, 14.058, 3.558, etc. More often than not, I was able to work a FISTS member who was just hanging around. Second, one day I was successful by "tailending". I tuned around listening for a strong signal and called that station as soon as he completed the QSO he was in when I found him. The Ham in question came back to me and we exchanged signal reports as well as the basic info. The last strategy was one of desperation that worked nicely. One day as it was getting close to 2400 UTC and I still needed that QSO; but the bands sounded dead - I ended up calling CQ anyway. And wouldn't you know it, I ended up with a QSO in the log for my efforts! So it just goes to show that even when a band sounds dead, it can't hurt to put out a CQ.

I was quite thankful, however, that I was able to keep my operating time to a minimum while still reaching my radio goal. My other and most primary goal was to have fun with my family; and I'm glad to be able to say that I reached that goal, too.

The one that got away.

Twenty Meters was really nice last night. I got on at about 0130 UTC and worked Bert DJ4EL on 20 Meter CW. He was running 100 Watts and I was running 5, as usual. Bert gave me a 559 report, which I was satisfied with. The nicest thing about it, though; was that it was a QSO with a DX station and not a DX QSO. I get really tired of and discouraged with, "599 tnx es 73 ..... QRZ?" Our conversation lasted only about ten minutes or so; but at least I know that Bert is retired from working for the German Tax Office. In turn, Bert knows that I am 48 and work in the professional photo industry. Ground breaking diplomatic relations? Hardly ...... just two Hams shooting the breeze.

The one that got away, however was a bit on down the band. While tuning through, I heard YI6LZ handing out contacts left an right. YI6 ...... plug the prefix into Win-EQF to see that that's Iraq! Wow, that would be a cool prize via QRP.

Fortunately, I'm addicted enough to QRP not to let it bother me too much. Yes, it would have been a real coup to have scored an Iraqi station with 5 Watts. But, there'll be another day and another time. Maybe next time there will be more sunspots!

Logging in the field.

Operating in the field is fun; and it gives a good chance to get out into the fresh air and sunshine. There's nothing quite like having a QSO on 20 meters while stationed next to a small stream; or in a park or open field, listening to the birds chirp and to the other sounds of nature.

Logging those contacts though, has always been a pain in the butt for me. I used to use the ARRL mini-logbooks; but invariably I would spill something on them, get them wet, have the pages become wind blown, dog-eared and messy. Writing notes about QSOs and then putting the pieces of papers in my pocket to transfer to my main log later was not the best solution, either.

The one day, I read an article on the WWW about using a Palm Pilot for logging QSOs away from the main shack. It seemed like a brilliant idea to me! A trip to eBay and a winning bid later ($26) procured an entry level Palm Pilot, the m105, for me.

Looking for logging programs revealed plenty! I finally settled on two - "QSO Diary" by Ray Goff G4FON and "Ham Pilot" by Chris Williams. "QSO Diary" is freeware and "Ham Pilot" is shareware with a $5 donation requested if you want to register the program.

Both programs are intuitive and quite easy to use. I finally settled on "Ham Pilot" for one reason. I subsequently purchased an optional, folding keyboard for my m105. It makes data entry so much easier instead of relying on the stylus all the time. With "Ham Pilot" hitting the enter button on the keyboard will move the cursor from field to field. The other programs require that you select each field with the stylus - a major drawback in my mind.

The Palm allows me to log my entries just as if I were doing it on my laptop in the shack at home. The price if the Palm is a mere fraction; as are the weight and size. A portable computerized logging system that is small, lightweight, efficient and runs on two AAA batteries. You can't beat that with a stick!