The Flight of the Bumblebees for 2017 is in the books!  Many thanks to Rich Fisher KI6SN and the Adventure Radio Society for sponsoring this "classic" Summer time QRP event.  I use the term "classic" because this was the 20th Anniversary of FOBB. It has provided so much fun for so many people throughout its two decade history that it deserves the status of "Classic".

The weather in Central New Jersey was about as perfect as it could be. When I left the house at Noon, it was sunny, with crystal blue skies, without a cloud in them. The temperature was a very comfortable 77F (25C) with low humidity - near picture perfect.

When I got to Washington Rock State Park, about 20 minutes later, I was greeted with a park that was nearly empty. Just a few people and all the picnic tables were vacant.  I went to my customary table and went about setting up the station.

First thing was the antenna of course. I'm not trying to be boastful; but I am getting darn good with that Joplin ARC antenna launcher.  As long as there's no stiff cross breeze to mess me up, I can place the line in one shot.  Today was no exception.  I got the "bullet" over a limb in the  40 to 50 foot high neighborhood and hoisted the PAR ENDFEDZ 40/20/10. 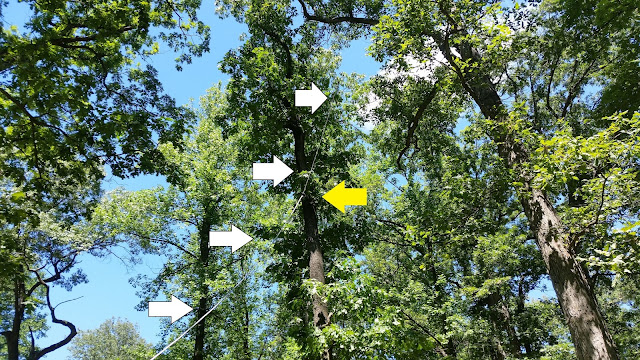 It's always hard to get a good photo of a wire antenna in the trees.  The white arrows point out the path of the antenna and the yellow arrow points to where the coax ends and the PAR begins. The end of the antenna actually ended up going a bit over a limb that is way higher up and is out of the photo. I had the station set up with plenty of time to go.  It afforded me the opportunity to make a few postings on social media, both Twitter and Facebook. 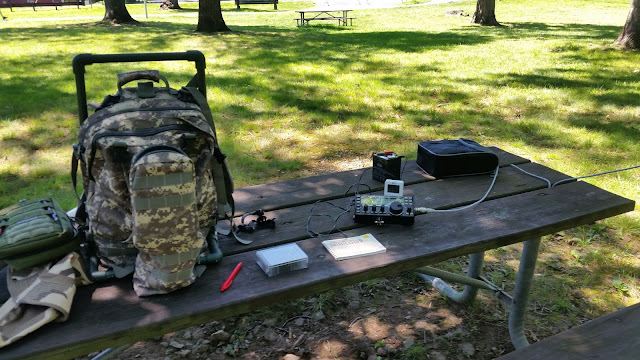 I decided to use my newly built QRP Guys KX single lever paddle for the entire event.  I wanted to see how it would hold up under Sprint conditions; and whether or not I would fatigue from using it; or other wide become uncomfortable.

The station power supply was my older Radio Shack 5 aH SLA and I think that today was its last performance.  It exhausted itself rather early on, even though I had recently charged it.  I got it used and it has served me well for the last seven years or so.  No regrets there; and I certainly got my money's worth out of it (it was free).  Luckily, my lithium battery is always in the backpack and it had more than enough capacity to carry me through until the end of the contest.  The reason I didn't use it from the start was that I had my suspicions about the health of the SLA and I wanted to see if they were correct.  They were.

Band conditions were not the greatest, to say the least.  20 Meters was the money band today; and I was disappointed with 40 Meters.  Usually 40 Meters yields me as many QSOs as does 20 Meters. Not today.  40 Meters was noisy and QSB was bad. Signals were either 599 or 449, and often they went back and forth between those two extremes whole I was trying to copy an exchange.

I ended up making 29 QSOs altogether. Not great, as I've certainly done better in past FOBBs. But given the fact that we're traveling down the downside of the sunspot cycle about as fast as the QSB was today, it could have been a lot worse. 19 were made on 20 Meters and the balance on 40 Meters, a 2/3rds to 1/3 ratio, where normally for me it's about even or closer to even. Some calls that stood out - Greg, N4KGL had the loudest signal that I encountered all afternoon. I also ran into AB9CA, NK9G, K4BAI, WA5BDU, WD8RFI and VE3LFN among many others.

I also received a post on Facebook from Mike KC2EGL who was with John K3WWP working N3AQC in PA that they heard me calling CQ on 40 Meters. Unfortunately, I wasn't able to hear them calling me and wasn't able to get a QSO in the log. Perhaps if I had done something a little bit different - more on that below. Hindsight is always 20/20. 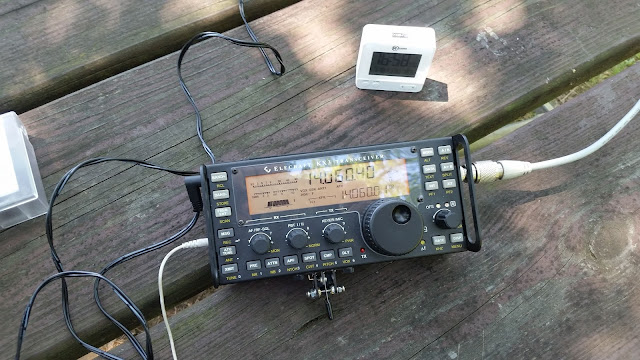 Lessons learned this time out:

1) The QRP Guys KX single lever paddle is a neat!  I used it the entire time and had no problems. No inordinate amount of sending mistakes and no fatigue. The paddle has a good feel to it and allowed me to send crisp code at varying speeds between 16 - 23 WPM.

2) I need new ear buds. The current ones have served me well the past 4 - 5 years. The right ear bud has developed a scratchiness which is not debilitating; but is definitely annoying.

3) Engage the noise blanker on the KX3 earlier. As I mentioned before, 40 Meters was pretty noisy up there at the park for whatever reason.  Towards the end of my stay there, it dawned upon me to turn on the KX3's noise blanker. It helped, a lot!  I probably wouldn't have made as many QSOs on 40 Meters as I did, without it. Sometimes I get so used to putting the "filter between the ears" through its paces, that I forget the mechanical and electronic aids that are available to me.

4) Trust your gut. The 5 aH SLA died rather quickly at Field Day and then it charged up rather quickly after. That told me right then and there that something wasn't quite right.  So even though I knew it was probably on its last legs; I was still hoping against hope that I was wrong and it was okay. My gut was right, my hopes were ill-founded.

5) This one I already knew, but I will reiterate - always carry back ups!

So even though a battery died on me, and I didn't make as many QSOs as I would have liked and band conditions were in the dumper, it was still a good day. As I wrote to W3BBO in an e-mail - a lousy day at QRP is way better than a good day at work!