I was surprised to come home from work last Friday evening to see a small package sitting on the front steps.  It was small, but yet a little too big to fit into the mailbox. I haven't purchased anything lately, so I figured it was something for either my wife Marianne, or perhaps for my daughter Cara, or my son Joseph.

But no, it was addressed to me; and when I looked at the return address, I saw that it was a package from my good friend and Ham Radio mentor, W3BBO. I opened the package like a kid opening presents on Christmas morning.  When I opened the box I was able to detect a whiff of "fresh paint" smell. Oh goody, a homebrew project! 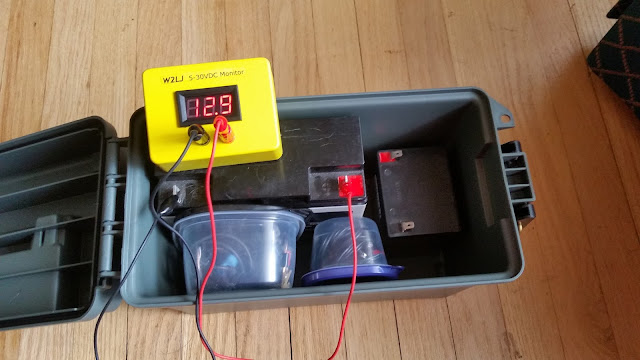 It turned out to be a home made DC Voltage monitor, manufactured from a voltage display that Bob had picked up at a local Hamfest, near his home in Erie, PA.  We either spoke about this topic, and my need for such a device during one of our weekly Saturday chats, or Bob is a talented mind reader! Wow!  Adding mind reading to his impeccable talents as a master builder / home brewing craftsman is quite the combination.

This is just the addition that I was looking to cobble up myself for my portable ops battery box.  I know that I can monitor the input battery voltage on the main screen of my KX3; but I prefer having an off board meter.  I can keep a tab on things when I use my batteries as well as when I charge them.

This ammo box, that I purchased from Dick's Sporting Goods holds my PowerWerx deep cycle battery as well as a smaller 5Ah SLA.  The two plastic boxes hold a battery charger and the associated cables that I need to connect these babies up to the KX3.  Now Bob's DC Voltage Meter is a welcome addition that will reside in the same container.

Yesterday, Labor Day was spent performing CERT duties for our town. We host a parade in the morning, a big "lawn party" on the grounds of the Middle School in the afternoon and then a fireworks display in the evening.  Our duty was to aid the Police Dept with crowd control duties so that no onlookers would get hurt.

There was a break between the lawn party and the fireworks, so I went home to grab some dinner and relax for a bit. I grabbed my tablet to check out e-mail and to take a quick look at our town's Facebook page to see what the reactions were to the parade.  Most were positive; but a couple were quite negative.  To the naysayers, I suggested that perhaps they should join the Public Celebrations Committee and help make the parade better next year.  You would think that I had just announced that Santa Claus had been shot dead by the Easter Bunny!

It's really sad that often, the people who complain the loudest are also the least willing to roll up their sleeves to help make things better.  My Mom always said that there are some people who just aren't happy unless they're miserable.  I think she was right.