The Summer of 2015 will probably be remembered very fondly by most Central New Jerseyans. It never got blisteringly hot. It was never chilly to speak of, while at the same time, the thermometer broke the 100 F (37 C) mark only once or twice.

But it WAS dry. Very dry. The last serious rainfall that we got this Summer was Field Day Weekend (of course). Since Field Day, you can probably count the number of days that it has rained on both your hands, and still have a finger or two left over.

Lawn mowing was sporadic. During a normal year, that's a weekly chore. This summer, there were stretches of weeks before mowing became necessary. My lawn is crunchy in spots, bare in a few, and green in others. The trees have been dropping leaves early, due to stress from lack of rainfall. According to the weather people, as of right now, we are about 5 inches (13 cm) below where we should be in rainfall for the year.

And it looks like that's all about to change: 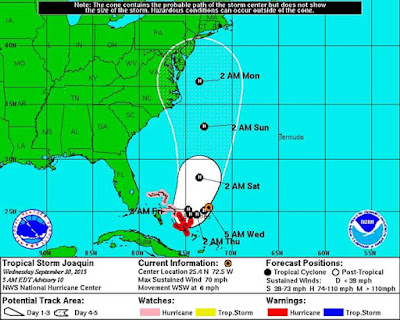 Say "Hello" to Hurricane Joaquin. He may be visiting us this weekend. As always, weather prediction is still more of an art than a science, but it's looking like a fair assumption that he will be bringing us a lot of rain, even if he downgrades to Tropical Storm. As it is, we're experiencing a rainy week. Joaquin might just be icing on the cake. Come next Tuesday, we may have received a drought busting 5+ inches of rain.

The ARRL has announced that the Hurricane Net has already been activated. The Simulated Emergency Test is due to be held this coming weekend. Maybe it won't be so "simulated" after all. Our fingers are crossed that we will not be experiencing another Sandy like result, where power was out for five days.