If I was a Major League Baseball player, I could say I went "three for three" this weekend. I had three things that I wanted to accomplish and I got all three done.

I chased both states on 40 Meters and on Sunday everywhere I tuned on the band, there were stations calling "CQ NQP". On Saturday, I had to really twiddle and hunt for South Carolina stations. I worked both QSO parties during the 1730 to 1815 UTC time window on both days. Maybe a lot of South Carolina Hams get stuck working Saturdays - who knows?

Anyway, that was goals 1 and 2 accomplished.

Goal number 3 was to build a sample of one of the kits we'll be offering at NJ Makers Day on March 21st. At our South Plainfield Amateur Radio Club last Wednesday evening, I was handed a WHDTS Sound Light Controller LED Lamp Kit. 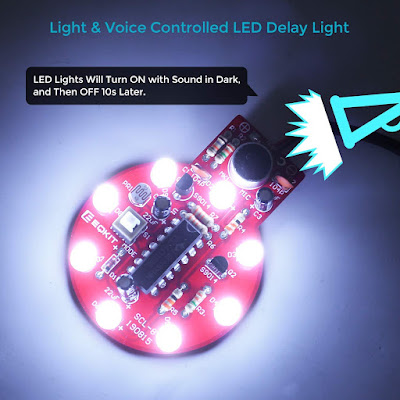 The instructions that came with the kit are clear and well written. The kit was not hard to put together at all, but it took me about 35 minutes. I'm thinking that a youngster who is inexperienced, and is just learning how to solder for the first time will take over an hour to build this - even with assistance. If you include the USB power cord, there are 28 components to solder, including a 14 pin DIP IC.

In addition to the regular resistors and disc capacitors, there is a 1N4148 diode, three electrolytic caps, 9 LEDs, two transistors and one switch - all of these being polarized components that you have to make sure are installed in the right direction before soldering. This is going to take time and we might have to recommend that this kit be geared more towards the older teens.

It works OK for what it is. You plug it into a USB power source and depress the switch. Then a loud noise like a clap or a whistle causes the ring of LEDs to light up. I put it near a speaker that was playing some music and that will cause the LEDs to flicker in time to the music as well - but the speaker has to be pretty loud. The microphone on this kit is not super sensitive.

Relatively speaking it was a good weekend and I'm happy that I accomplished the things that I wanted to. It was tough being in the basement this weekend, though. While it was in the 30s outdoors on Saturday and the low 40s on Sunday, the basement remained a "balmy" 57 degrees. Not the most comfortable. I just don't know how WG0AT and these other SOTA guys do mountain topping in the Winter. It's definitely not for me!