This thing is a life saver!

I began the process of building my 40 Meter QCX kit tonight. It's been a while since I have attempted to build a complex kit. One thing that became apparent is that my eyes are not what they used to be. Granted, the light here in the dining room table is not the best. One chandelier hanging above the dining room table really isn't up to the task, but I went with what I had. While the main build will be done down in the shack, I wanted to inventory the parts up here because there is more space and less of a chance that anything would get lost.

Another big difference is the manual. No doubt that Hans Summers went out of his way to produce a SUPERB building manual .........but. It's on the computer and not a printed out hard copy. I do not have the ink to print out a 141 page manual. So I am going to have to get used to not "checking off" each step as I go along, like I used to in Heathkit and Elecraft Manuals.

Welcome to the 21st Century, W2LJ!

The good news is that everything that's supposed to be there, is there. There were a few extra capacitors of values that were not listed in the parts manual, but they're not going anywhere just in case.

And speaking of capacitors ....... the print on them is infinitesimal! It was not too long ago that I was able to read those tiny characters with only occasional help from a magnifying glass. That's not the case anymore, so thank God for the person or persons who came up with this concept: 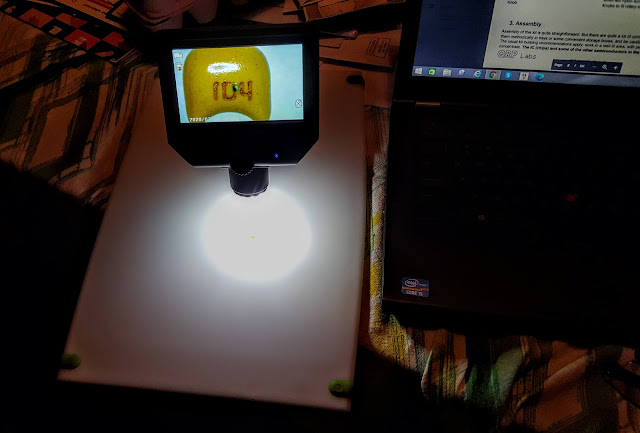 Due to the glare, you can't see the capacitor on the surface of the white board, but look how nicely the numbers printed on the cap pop out on the screen of the magnifier. This made a potentially frustrating chore a relative breeze!

Again, due to failing eyesight and less than ideal lighting, I had to resort to using a VOM to measure the resistors. The colors were hard to distinguish and the meter made that chore relatively painless, as well. The magnifier/microscope thing would probably have worked well here also,  but I didn't think of bringing it upstairs until faced with identifying the capacitors.

I filled four egg cartons with parts in the order as they appeared on the parts list of the manual. Of course, being as OCD as I am, I will re-check each value before I install it. But I am looking forward to melting solder - maybe as early as tomorrow evening!