Welcome to the new addition

When we lost Sadie, many of you out there suggested adopting another cat.  We hesitated with that decision as there will never be another Sadie, but we did see the value of saving another kitty from a bad fate.

That Saturday, Joey and I stopped by the local PetCo to pick up some dog biscuits for Jesse.  That was where we met Spongy. 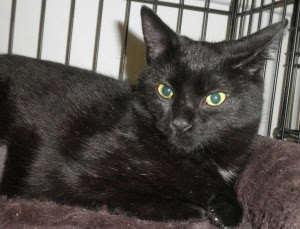 Spongy was born last June and got separated from her Mom as a consequence of Hurricane Irene.  Spongy was found as a kitten, wandering around Long Beach Island, NJ by a man selling ice cream - Sponge Bob ice cream bars, hence her name.

The man who told us about Spongy was affiliated with Cattitude, NJ, a pet adoption organization that rescues cats and dogs. He said that Spongy was in a foster home longer than most kittens, as people seemed to be hesitant about giving a black cat a home. I guess there are a lot of superstitious folks out there.  Well, that sealed the deal for me!  Spongy, who is now seven months old, officially became a member of the W2LJ household this past Thursday.  After a day of being scared and hiding behind furniture or down in the basement, Spongy found her courage and now walks around the house like she owns it.  She's not even scared of Jesse anymore. She is a sweetheart and is quite the purr machine who loves to be petted and scratched behind her ears. And does she love chasing the red dot from a laser pointer! 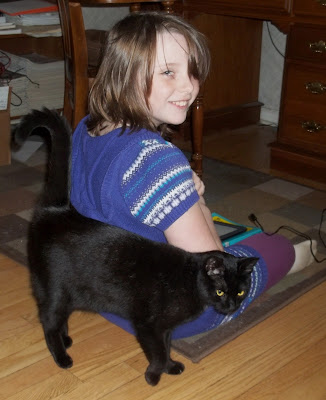 Spongy with Cara
Thanks to all of you out there who sent notes and comments during a bad time - they are appreciated more than you will ever know.  Our home feels just a little bit more "whole" now, and although it will never be the same without Sadie, I think she would have approved of us saving one of her feline sisters from being homeless or worse.