My lunchtime QRP session had that ominous look, like it was going to end up being a bust.  The bands were nowhere near as hearty and robust as they were the past few days.  15 Meters had one strong signal, HA9RT booming in.  I've worked Jozsef several times in the past, and even though he was coming in like gangbusters, I figured I'd let him get some new stations in his log.

20 Meters was a ghost town and 17 Meters seemed to be the liveliest of the three bands.  Still, there wasn't much activity and the signals I was hearing weren't the strongest.  I didn't feel like going back into the building, so I decided to call CQ on 17 Meters.

Much to my surprise, I was answered by George KX0R who was the first place finisher in last year's NJQRP Skeeter Hunt. George had a nice 579 signal into New Jersey. He was using an ATS3B at 5 Watts into an inverted "L" on a mountain in Colorado.  Bald Mountain, SOTA peak W0/FR174, to be exact. 9,190 feet above sea level to be even more exact.

Warren, the town where I work, is located on the second ridge of the Watchung Mountains here in New Jersey. My height above sea level there is all of about 500 feet or so.  Not much, by mountain standards, but since most of New Jersey is coastal plain and Piedmont, 500 feet is pretty high up there for a relatively flat state. 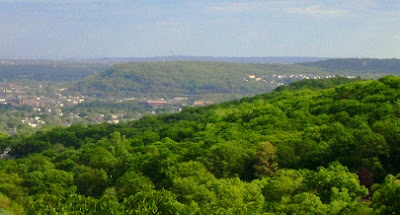 Now, according to geologists, if we went back in time, say about 200 million years or so, the Watchungs were about as tall as the present day Rockies or even the Alps. Just goes to show what time, rain, ice and wind can do to you, eh?  So in essence, compared to the Rockies, and even the farther western Appalachians, the Watchungs are more or less just "hills".  But they're our hills and the original settlers of New Jersey called them mountains, so who are we to argue?