Not the weather (for once) although, it's still pretty warm.  No, I meant 15 Meters at lunch time was sizzling hot!

Besides telling you who I worked,  let me tell you about "the one that got away" a bit later. (As if I ever stood a chance!). First things first, though. I got to the car and set up the station. A quick scan of 17 Meters left me feeling - "meh".  20 Meters was a little better, but not all that much to write home about, either.  That's when I got the inspiration to check out 15 Meters.

Saints Cyril and Methodius were the two men responsible for bringing Catholicism to the Slavic nations. Today this area includes the following countries - Bulgaria, Croatia, Belarus, the Slovak Republic, the Czech Republic, Belarus, Russia, the Ukraine, Macedonia, Lituania and Latvia, Estonia, and yes, Poland - the land of my ancestors.

There is a big seminary in Orchard Lake, Michigan named after Saints Cyril and Methodius.  Almost all the priests that were in the Polish ethnic parish that I attended while growing up, graduated from that seminary. For me, working OL2013CM held a lot of sentimental value, and was a big deal. 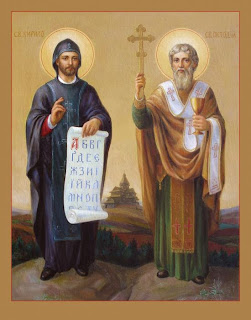 And as always, there's a diploma that's available for working stations associated with the Special Event.  For the details, you can visit: http://award-cm.ok2kyd.cz/en/award-rules.html   Now, time for a bit of trivia. Besides introducing Catholicism to that part of the world, this duo also developed the Glagolitic alphabet, which was used to transcribe the Gospels into the Slavonic languages.  While that alphabet is no longer in use today - one of its descendant scripts is still very much in use today - the Cyrillic alphabet.  Wonder where they got that name !!!

After working OL2013CM, I also worked 4O/UA3RF in Montenegro and HA8QZ in Hungary.  Indeed,
15 Meters was open and very hot to Europe. Three solid QSOs to Europe in the span of minutes. Priceless!

But now for the one "that got away".  Down towards the bottom of the band (just above where CO8LY was calling CQ), I heard a very loud (extremely loud!) BY4IB/4.  China!  Holy cow, I never heard a station from China so loud. 599+ loud!  Insanely, I thought I stood a chance.  He was working split, and with the KX3's Dual Watch feature, I was very handily able to figure out the split, in no time.  I was determined to keep on throwing my call out until either:

Well, Door Number Two opened first, as he slowly faded away into oblivion.  And I never made contact, despite my best efforts. But if I had, how cool would that have been?  NJ to China on 5 Watts with a Buddistick!  I'd still be doing the ecstatic dance (never mind the happy dance) if I had been able to pull that off!