It's evident that we are now on the down side of the peak of Cycle 24.  For the most part, I have had superb conditions for working DX during my lunch time QRP sessions for the past 17 months. DX has been plentiful, with good signals and decent RSTs on both ends. 17, 15 and sometimes even 12 Meters have been happy hunting grounds.  There have even been smatterings of openings on 10 Meters, which is not often the case during the 1700-1800 UTC weekday time frame.

I still hear DX signals on 17 Meters, but they're not as strong or as plentiful as they were. 15 Meters is nowhere near as nice as it was just a few months ago.  It wasn't so long ago that I was working three or four different DX stations during my lunch break - and it seemed like all areas of the world were open at the same time! I think that the days of working the world "with 5 Watts to a wet string" are just about over - as far as Cycle 24 is concerned, anyway.

With band conditions changing, it seems that lately, more and more of my lunch QSOs have been domestic - not that there's anything wrong with that!  Today, I was saved from being shut out at lunchtime by Jim K4AHO, who answered my CQ on 20 Meters.  We had a nice chat that was not only 2X QRP, but was also 2X KX3.  Jim was using a dipole and I was using the Buddistick, of course.  QSB was a bit of a nuisance. At the fading's worst, Jim was 459, and at best he was 579 (which he was for most of the QSO).

In addition to the declining ionospheric conditions, the weather here in New Jersey this Summer has been less "Summer-y" than I was looking forward to.  Take this morning for instance. When I woke up this morning, the thermometer was displaying an outdoor temperature of 52F (11C).  Very strange for August 18th.  That's almost unheard of, any other year. On the whole, it's been an average to dry Summer and the temperatures have been down and the humidity has been way down compared to the past three or four Summers.  The number of days that we have reached or have gone above 90F (32C), can be counted on both hands. There have not been many hazy, humid, hot days (The Dog Days of Summer) this year at all.

The weather people on TV have been saying that we are experiencing is an "average" Summer for this part of the country. The past few have been hotter than normal, so that's why this one feels so strangly cool. After the Winter we had last year, I was really looking forward to the heat.  I guess there's still time for us to get some hot days, but I saw on the AccuWeather.com website that the Northeast and the upper Midwest are supposed to experience a Polar Vortex in mid September, bringing along temperatures closer to what we might expect in mid to late November. Brrrrrr. 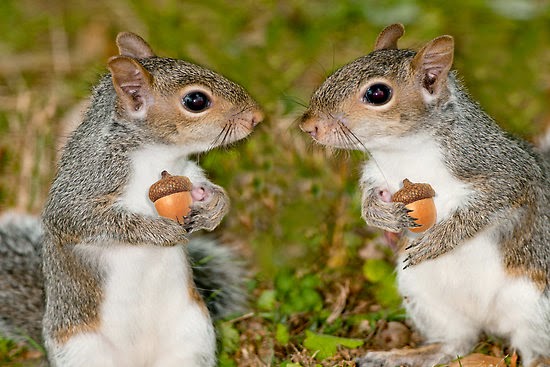 The other day, while walking my beagle Harold, I noticed the oak trees in the neighborhood are already shedding their acorns. That's not a great sign as the trees did the same thing around this time last year and we had a terrible Winter.  Normally, the acorns don't start falling until mid to late September around these parts.  The squirrels will have extra time to store up food for the Winter, and we'll probably have another long, cold one.  Oh well, at least conditions on 160 and 80 Meters will probably be good. You always have to look for the silver lining and try not to think about the heating bill!