So far, I have received over 70 e-mails with Skeeter Hunt log summaries, soapbox comments and photos. That's close to a third of the people who asked to be assigned a Skeeter number; and is definitely a record so far. The deadline for submitting log summaries is September 1st at 11:59 PM EDT. After that, log summaries will still be accepted, but will appear as a footnote as far as official standings go..

To be honest with you all, right now I'm just concentrating on tabulating results, and am kind of glossing over soapbox comments and photos. Except for this one, which caught my eye and gave me what has probably been the biggest smile this stubbly old mug has seen in years. Since it will eventually be published in the 2019 Skeeter Hunt Soapbox Comments section of the webpage, I am going to share it early. Not only does it deserve special attention, but it also makes the effort behind the Skeeter Hunt so worthwhile.

Since he’s in bed and has school in the morning, I’m submitting Etienne’s logs (WI9EJR; #144) on his behalf. Since we only have one radio, we ultimately decided to run a single op station, so I won’t be submitting logs (WI9AJR; #143). Logs are attached in CSV format. I’ve never submitted contest logs before, so if another format is preferred, let me know.

I’ve attached two photos, one of Etienne helping raise Rick's (NK9G) antenna which was in the same general vicinity as our station. And another of Etienne’s station, including the logo sign we hung from the EZ-up.

This was Etienne’s first contest, other than Field Day (“it’s not a contest!”), so why not make it SSB on QRP in the worst possible propagation? We headed over to Sheridan Park in Milwaukee, overlooking Lake Michigan (in the photo background), near the popular Oak Leaf Trail pathway. Rick (NK9G), as usual, took us under his wing, loaned us a longer dipole than we usually use, and helped us get it up high up into the trees. We hooked it up to our KX3, and let Etienne go to town.

Etienne alternated the four hours between calling CQ and hunting around on 20m. The bands started pretty quiet, with him being able to hear a few people but not much ability to be heard. Strangely, his first contact was a QRP station in North Carolina, with both sides hearing each other really clearly. Later in the day Europe started coming in, but Etienne either wasn’t getting back them or just couldn’t break through the pile ups. Finally, by the end of the contest things opened up to the western US, but 20m was so full that it was hard for him to be heard.

All in all, it was a good day to spend some time out in the park and for him to play on the radio. QRP with phone is a tough racket, so hopefully he’ll learn Morse sooner than later. And for those wondering, he’s eleven, just started sixth grade. He got his General last summer when we started ham radio. 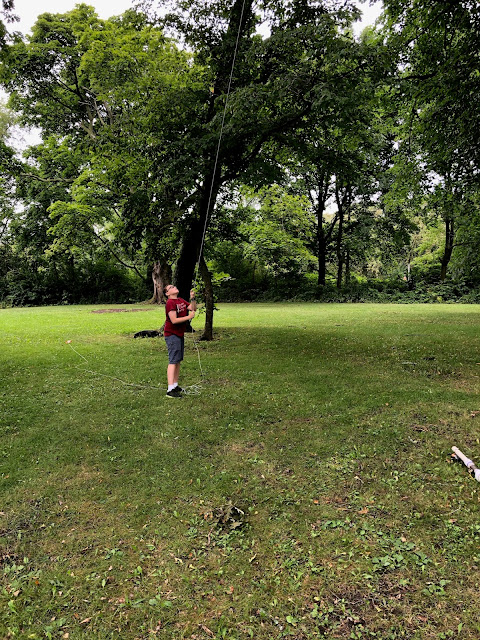 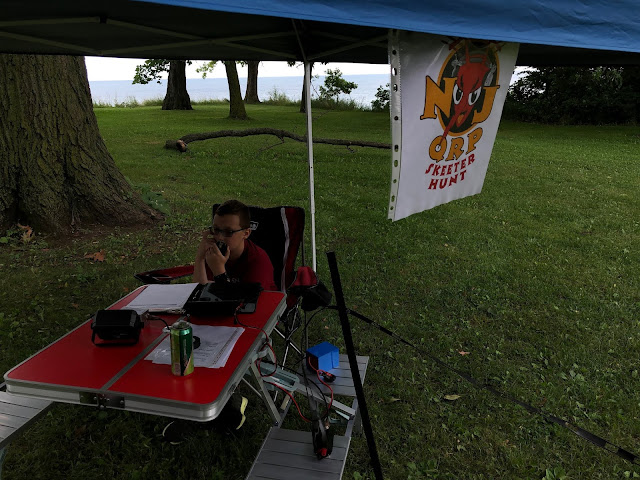 An outstanding effort by this young man!  QRP SSB can be a tough go; and has caused many a person much older than Etienne to throw up their hands and toss in the towel. However, he stuck with it (under particularly crummy band conditions) and made a good number of contacts.  His perseverance and determination are to be admired. These qualities will serve him well as he travels through middle school, high school and college.

Kudos to Etienne,  and kudos to his Dad, Andre WI9AJR and to Rick NK9G for being outstanding mentors.  Amateur Radio needs a lot more like these two fine men.  I don't know Andre that well; but I do know Rick as an active and particularly excellent QRP'er. Now, I also know him as a particularly fine mentor.

If stuff like this doesn't bring a smile to your face, then I don't know what will!