When I woke up yesterday it was pretty dark and gloomy. As I showered and changed to get ready to head out to Church services, I was thinking that I would probably set up in the backyard, under the patio umbrella, as it looked like rain. Lo and behold, halfway through Mass, the sun poured through the stained glass windows! It was turning out to be a decent day, after all.

I came home for a light breakfast, printed out a Skeeter logo and got everything else ready. At Noon, I headed out for Cotton Street park in town, which is only about 1/4 mile or so from my house. The trees are tall and there's plenty of open space, certainly enough for this new-to-me MFJ-1982LP that I purchased.  (That goes against my grain, but I was intrigued enough by the YouTube videos on it.)

MFJ recommends installing the antenna as an Inverted Vee, with both ends tied off close to the ground, and the apex as high as you can get it. I brought my antenna launcher and got a line shot over a limb at the 40 foot or so level on the first try.  The antenna is made of that "silky" type wire which pulled through the leaves like a hot knife through butter. The thing that took me the longest was untangling the antenna out of the package. I'm not sure whether it was the way I took it apart, or the way it was coiled and inserted into the package, but I managed to untangle it in relatively short order - short enough where frustration didn't get a hold on me. 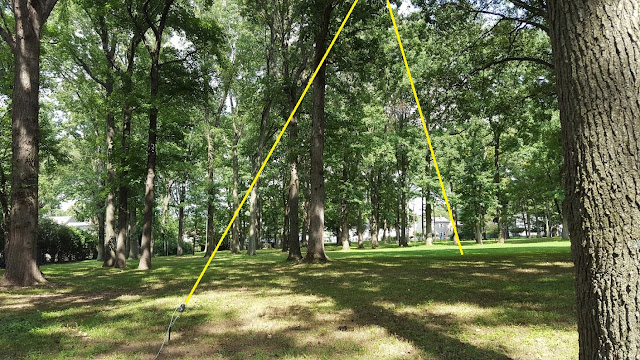 Of course, when you take a picture of your wire antenna installation, it never photographs well unless the wire is against the sky.  For illustration purposes, I provided the yellow lines to make it easier to see how the antenna was configured. The apex is out of the top frame of the photo. It was up pretty high.

I got set up with about a good 15 minutes to spare, so I decided to do a little investigating. One of the parts of the video that intrigued me was how low the SWR was across all the bands. I took the KX3's autotuner out of the loop and test transmitted at all the QRP Watering Hole frequencies on 80, 40, 20, 17 and 15 Meters. In each case, the KX3 measured an SWR of 1.4:1 or better. 80 Meters was actually 1.2:1. I was impressed - cautiously impressed. After all, a dummy load has a perfect SWR, right?  Time was fast approaching to see how well it radiated some RF energy. 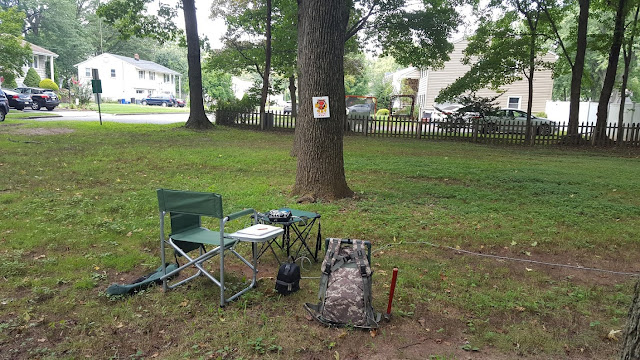 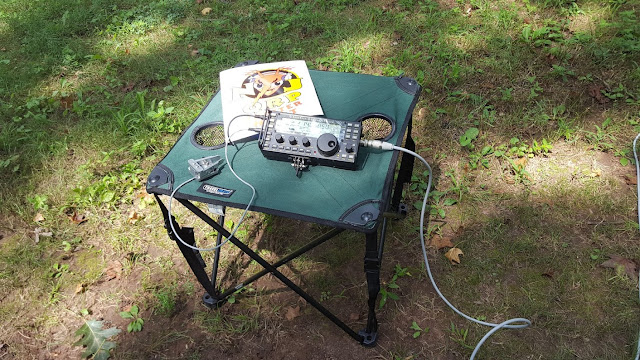 The weather stayed nice for the Hunt. My little Realistic travel alarm has a built in thermometer, which read the ambient temperature as 90F (32C), but in the shade and an occasional breeze, it was comfortable enough. Mosquitoes weren't a problem for me, but the gnats were. Tiny little critters that you can barely see, flying right into your face. Ugh! But after settling down into the operating chair and cooling off after the job of setting up, they went away. They must be attracted to body heat or sweat or something. Luckily they were not a problem, or a distraction during the Sprint.

When 1700 UTC came around, the bands came alive - at least 20 Meters came alive. I was working stations at a pretty good clip and then after the first hour, activity seemed to die off some. I spent the rest of my time jumping between 40 and 20 Meters, alternately calling CQ and hunting and pouncing.

Around 4:15 PM (2015 UTC) the skies started turning that heavy lead gray color that tells you that thunder and lightning are on the way.  It was then that I pulled the plug and started to tear down. I hadn't worked anyone new in about 15 minutes anyway, so it seemed as good a time as any to head home. Tear down was a breeze and I was packed up and ready to go in minutes.

In all, I made 24 contacts. 22 were Skeeters and the other two were 5W stations. 15 S/P/C's were logged. I was a bit disappointed with propagation.  Before the Hunt started, I had set a personal goal of working 40 stations. With 210 Skeeters signed up, I thought that was a reachable and reasonable goal. The Propagation Princess slapped me upside the head, "You silly Ham, you!", she whispered in my ear.  I didn't have the pipelines that I normally have into New England and Virginia and the Carolinas.

QSB was tough with stations being 579 or better upon the start of a contact to going down to 339 or worse by the end of the contact. I did work everybody that I was able to hear with the exception of two stations - one of them being Dave NE5DL down in Texas. I tried calling him several times, but no joy.

Drew K9CW gets the distinction of being the loudest station that I heard all day - he was 599+ from Illinois. Jerry N9AW and Rick NK9G were close seconds. When I heard them not quite as loud as I usually hear them, i knew that propagation was off. I did work two stations on both 40 and 20 Meters - Bob W3BBO and  Steve VE3LFN. Malcolm VE2DDZ was a two-fer in that I worked him as a Skeeter and also as a SOTA peak. My best DX was Blaine, K0NE in Nebraska. 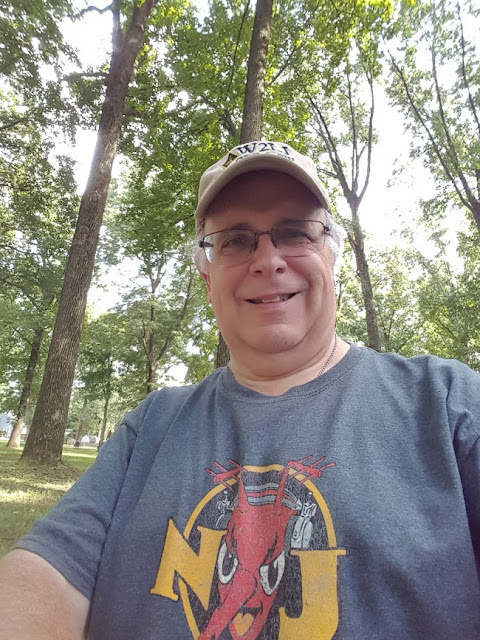 Two things I should have done, but didn't - hindsight being 20/20, after all.

1)  I should have brought my lightning detector with me. I left it home on the counter that it normally sits on. I probably might have stayed longer, even with the leaden sky if I was sure there was no lightning in the area.

2) I should have also set up my PAR ENDFEDZ  for a little "A to B" comparison. That would have provided me with some valuable information. Of course, I thought of this as I was driving the short distance home. Maybe I'll do this for the Peanut Power Sprint, which comes up soon.

Again, I'd like to take this opportunity to thank all of you who participated, as well as the NJQRP organization for sponsoring this event. It would not be the success that it is without all of you out there. For that, I am eternally grateful!