That was just too much fun!

Days like this don't come along all that often.  The weather was absolutely beautiful, even if it was over 90F.  The sun was shining and there were very few clouds - and better yet, no sign of thunderclouds this year!

I got to the park a little bit later than I had planned; but the main chore, setting up the antenna took less time than I had anticipated - less than 10 minutes!  I used my EFHW wire, the first 18 feet or so supported by the crappie pole. 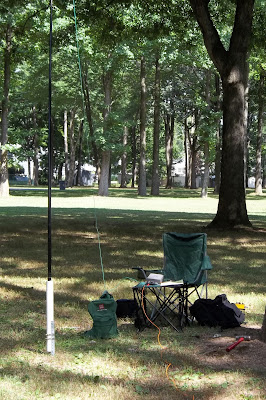 My operating position
After that, I shot a line into a tree down aways.  My home brewed antenna launcher got a line over a 30 foot branch in a neighboring tree on the first shot!  So from the crappie pole, I had an "Inverted L" going to a very respectable height. 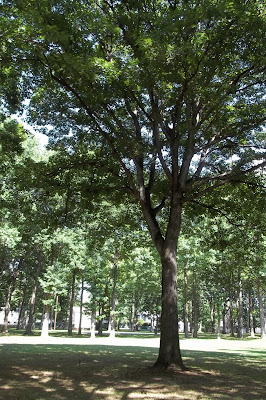 This tree supported the other end of the antenna.
I ended up using the K1 for the entire event; as the first thing I did was to listen on 15 Meters, but found the band to be dead.  The K1's autotuner handled the EFHW quite nicely and was able to give me a match with nary a problem.  I was able to switch between 20 and 40 Meters quickly and pain free.  As I watched the output power scale while transmitting, it was obvious on each band that I was getting a full 5 Watts out with no power being "folded back". Good job, K1 ! 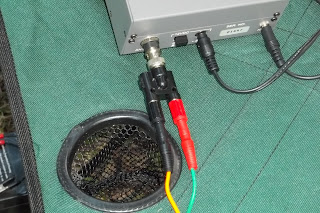 But even with that mild disappointment, it ended up being a perfect day.  Working stations while outdoors, feeling a breeze on your face, breathing in nice, fresh air - that's what this is all about!  If I had worked only 5 stations or had worked 200 - I could be no more pleased than I feel right now.  Time to savor it as it will pass all too quickly. 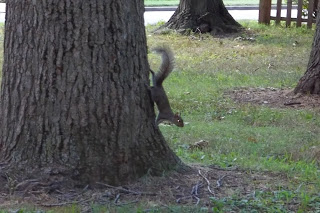 I ended up dismantling the station around 4:30 EDT, as I wasn't hearing anyone new on 20 Meters and 40 was dead, as I had mentioned earlier.  Besides, the park's citizenry were starting to get a little too used to me, another sign that I was starting to wear out my welcome.
It was good to hear so many stations buzzing around!  And we were all spread out quite nicely - no little pileup clump concentrated on the precious real estate around 14.060 MHz.  I look forward to sharing the results with you after I get them in and tabulated.
72 de Larry W2LJ
QRP - When you care to send the very least!

If you want to see another FOBB story, in a MUCH, MUCH more photogenic setting, check out W1PID's FOBB tale:  http://www.w1pid.com/fobb11/fobb11.html
Posted by Larry W2LJ at 6:16 PM