No Bees flying in Central NJ

Today was the annual "Flight of the Bumblebees" QRP contest. Unfortunately, there were no Bumblebees flying in Central NJ, either the real or Amateur Radio varieties.

The day started out hot and sticky. While going to Church this morning, stepping out of doors felt more like stepping in to a sauna, than stepping outside. Then, around Noon time, the skies exploded. A line of severe thunderstorms crept its way through our area. There was plenty of spectacular ground to cloud lightning, nickel sized hail, and the rain bucketed down at rates of 2 - 3 inches per hour. Local highways; such as Route 18, through the New Brunswick area were flooded and unpassable to local traffic.

Both Amateur Radio stations, portable and permanent remained unplugged from their respective antennas for the entire day. The thunderstorms abated around 3:30 PM or so; but it continued raining until around 6:00 PM, long after the finish of the contest.

So, as the famous Brooklyn Dodger fans would say ..... "Wait 'til next year!"

Tonight's 20 Meter QRP Foxhunt was about as much fun as an ice pick in the forehead.

I didn't expect to work Tom KV2X because Upstate NY and Central NJ are too close for 20 Meters. However, I did think I was going to have a good shot at working Dave, N0IT out in Missouri. Wrong! Dave was hovering at 229 all night long with one or two flares up to 339. I called several times; and if he heard me ...... I sure wasn't able to tell.

I stuck around for just about the entire hour and a half; as hope springs eternal. I would've been better off spending my time reading a book! 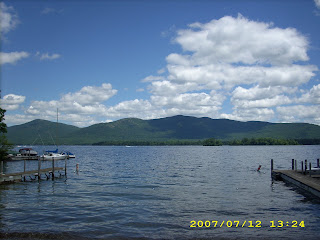 We (me & the family) just came back from a wonderful week up at Lake George, NY. The picture you see to the left was the scene that I was fortunate enough to wake up to each morning.

I brought the K1 and PAC-12 along; but truthfully, I didn't use it that much. I delighted in the time that I was able to enjoy the company of my wife, Marianne; and our two children, Joey and Cara. It's not often that I get to give them my undivided attention without some distraction or other getting in the way.

However, I did set the station up for the Thursday night QRP Foxhunt; just to get an idea of what I'd be able to hear. Unfortunately, I did not hear either Fox; but I did hear a lot of Hounds. Tom Palmer, N1TP out of Naples, Florida almost blew my eardrums out with his loud signal! It was hard to believe that the was all the way in Florida, he was so loud! I also heard a few of the other regular hounds; but after a bit, the mosquitoes and biting flies drove me indoors.

The next day, while sitting at one of the picnic tables, the owner of the resort came to ask me why I hadn't set up the station more than I had. I told him that I was happy to spend the time with my family. Surprisingly, he was very generous and supportive of my Ham radio activities! He told me that if I wanted to string up something in the trees next year; that it would be alright with him!

That threw me for a loop! But he had commented on how we've been decent tenants for the past years; and he has appreciated the fact that I have kept the radio activities "discrete" so as to not bother other tenants. I thanked him for the offer; but at the same time told him that I'd continue to keep things stealthy and discrete. Don't want to upset the apple cart!

BUT ...... if you're ever considering a Lake George vacation; and you need a good place to stay; the consider the Stepping Stones Resort, in Diamond Point, NY. The proprietor (Chuck LaPlante) is a super guy; and he has a wonderful place. It's quiet, super clean, well -equipped to provide a relaxing, fun filled family vacation. You can check him out at: http://www.steppingstonesresort. com.

Tell him that Larry sent you! He'll know!

God bless our Military who are protecting
our Country and our freedom.
Without them, and their sacrifices, we could not celebrate
the 4th of July.

I watched the Flag pass by one day,
It fluttered proudly in the breeze.
A young Marine saluted it,
And then he stood at ease.

I looked at him in uniform,
So young, so tall, so proud!
With hair cut square and eyes alert,
He'd stand out in any crowd.

I thought of how many soldiers like him,
Had fallen through the years,
How many had died on foreign soil?
How many mother's tears?

How many pilots' planes shot down?
How many sailors dead at sea?
How many foxholes now are soldiers' graves?
NO ..... freedom is NOT free !!!

I heard the sound of "Taps" one night,
when everything was still.
I listened to the Bugler play,
And felt a sudden chill.

I wondered just how many times,
That "Taps" had meant "Amen".
When the Flag had draped the coffin
Of a brother, son or friend.

I thought of all the children,
Of the mothers, of the wives,
Of fathers, sons and husbands
With interrupted lives.

I thought about a graveyard
At the bottom of the sea,
Of the many graves in Arlington,
NO .... freedom is NOT free !!!
(Author unknown)

Enjoy your Freedom, and may God
continue to bless America and our troops!

And in a special way, may God grant peace and rest and light
upon the soul of Sgt. Trista Moretti of South Plainfield, NJ
who died last week in Iraq in service to her Country,
and was laid to rest with full Military honors on July 3rd, 2007.

Eternal rest, grant unto her, O Lord
and may perpetual Light shine upon her.
May her soul, and the souls of all the faithful departed
rest in peace. Amen. 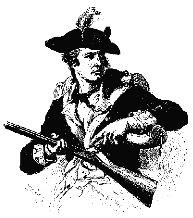 Here it is, the night before the birthday of the United States of America. I sit here kind of depressed; wondering what the Founding Fathers would think of their "experiment" now.

We live in a country which was founded upon the notion that the people rule and that the government is but a servant. The reality seems to be 180 degrees out of kilter with the original idea.

People seem to be content to let our representational republic become a "nanny state" where the government is supposed to do everything from diaper you, to feed you, to house you, to find you employment, and to finally - bury you. Where's the initiative? Where's the self-reliance? Where's the pride?

I think that if George Washington, John Adams, Thomas Jefferson, or Benjamin Franklin knew what has become of their beloved idea - they would be spinning in their graves.

Freedom of Speech is a joke anymore. State your honest opinion, and if it doesn't agree with the "PC Police"; then you are branded a racist, homophobe, misogynist, or some other horrible thing. A large portion of the population is always moaning and whining about the losing of civil rights; but those same people are more than happy to take away your Constitutional right to bear arms. Those same people would chastise you for shooting a bear; but give no nanosecond thought to murdering an unborn child in the womb. Where did we make the wrong turn? How did we lose our collective conscience and common sense?

But yet, there is hope. Hope that the common sense of the common people will prevail. That the government will someday return to the principle of being, "for the people, by the people, of the people". Hope that we will return the common sense principles on which we were founded. Hope that the United States will once again become the "melting pot" where we celebrate the American ideals and goals that we have in common, instead of worshiping at the "Altar of Diversity" where we blindly idolize the things that make us different. Hope that we will return to being a nation that promotes a Culture of Life instead of promoting a Culture of Death.

America is still the Shining Beacon - still the "City on the Hill" as the late Ronald Regan so fondly referred to us. By and large, we're still a people that believes in God and for the most part we remember who we are and where we came from. American ingenuity still exists; and we can still do things that no other country would dare try to do.

By and large, we're still pretty down to earth, grounded and on the ball.

"And just as Tom here has written ....
The shell may belong to Great Britain
But the eagle inside ...... belongs to us!"

Benjamin Franklin, from the musical "1776"

Flight of the Bumblebees

I hope that this blog has piqued your interest in operating outdoors. If it has, then I have accomplished something. If your interest is indeed, piqued, but you're not quite sure how to get started; then, boy howdy, do I have an event for you!

The Flight of the Bumblebees is a 4 hour QRP sprint that is sponsored by the Adventure Radio Society and takes place every year on the last Sunday in July. The idea is to get your gear out in the great outdoors; and make as many contacts as you can over said 4 hour period. Those of us who operate in the portable mode are "bees". We're given numbers that we will hand out as part of the contest exchange. This year my bee number is 63. I forget what it was last year - a higher number, if I remember correctly.

Last year I operated from a park here in town; and I might do the same this year. Or perhaps, I might go up to Washington Rock Park which is in a nearby town. Washington Rock got its name because it's on a high point of the first ridge of the nearby Watchung "mountains". I use the word mountains in quotation marks because the Watchungs are part of the Appalachian mountains, which are mountains to us in New Jersey; but are merely hills to you folks who live among the Rockies!

Anyway, George Washington used this high point as an observation post back in the Revolutionary War to keep tabs on Redcoat camps and troop movements. It's now a park, and there's plenty of space to set up either the PAC-12; or the NorCal Doublet as there are plenty of trees, too.

However, I digress, as this post is supposed to be about you; and not me! Use this event to kick off your outdoor QRP operating experience! I guarantee that once you do, you will look for every opportunity you can to do it again. Operating QRP in the outdoors is very addicting!

For more information on the Flight of the Bumblebees, please visit: http://www.arsqrp.com/ars/pages/bumblebees/bb_rules.html
and to get a Bumblebee number of your very own, you can send an e-mail to John Huffman N1ESE at hjohnc@adelphia.net

Hopefully, I will hear you on that last Sunday in July; and we can exchange Bee numbers and help each other rack up some points!