We will never forget you.
We will always be grateful for your sacrifice.
You will forever be in our prayers. 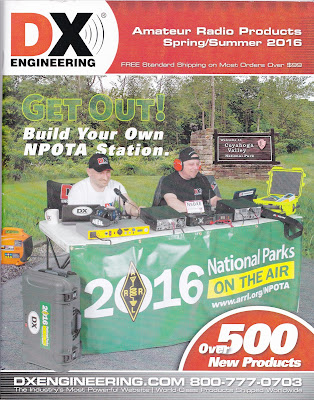 Back in the saddle again!

The tendinitis in my ankle still has me wearing my "boot". However, it feels good enough to allow me to hobble down the basement in order to get back behind the radio. So I was happy to work five NPOTA ATNOs this weekend!

I have 112 confirmed, with two of the five from this weekend. Once the other three logs are posted, I should be up to 115 confirmed.  What was even cooler is that four of the five QSOs were CW QSOs. I am so much more used to working CW pileups than SSB pileups. I manage, but I feel slightly like a duck out of water when using the microphone. In a CW pileup, I feel like it's just a matter of time, while in a SSB pileup, I keep my fingers crossed the whole time.

Next weekend in the USA is Memorial Day Weekend, which is the "unofficial" beginning of Summer.  It's my humble opinion that this will bring out a lot more NPOTA activations, with folks having vacation time, and/or wanting to spend their weekends outdoors, if at all possible.

The Activator bug is biting me again, causing me to itch.  I'm thinking that WR03, the Delaware National Scenic River is a possibility. Maybe Washington's Crossing Park.

Keeping an eye on the QRP reflectors, it seems that KX2 mania has seriously taken hold (and Hamvention has just barely begun!). If you don't mind having a "previously owned" (read ......used) KX3, then keep your eyes on QRP-L, the Elecraft reflector, QRZ.COM and eHam over the next few weeks.

I see a few guys are already selling off their KX3s so that they can purchase a KX2. Not sure if this will become a trend, or of the wisdom of it, but then I am not yet a SOTAteer, either. The additional size and weight of the KX3 are not sticking points for the type of portable ops that I do.  But for some, especially those who do long hikes, I guess it is a case of "smaller and lighter = better".

In any event, if you're looking ...... you just might find that for which you are seeking.

To be debuted at Dayton Hamvention: 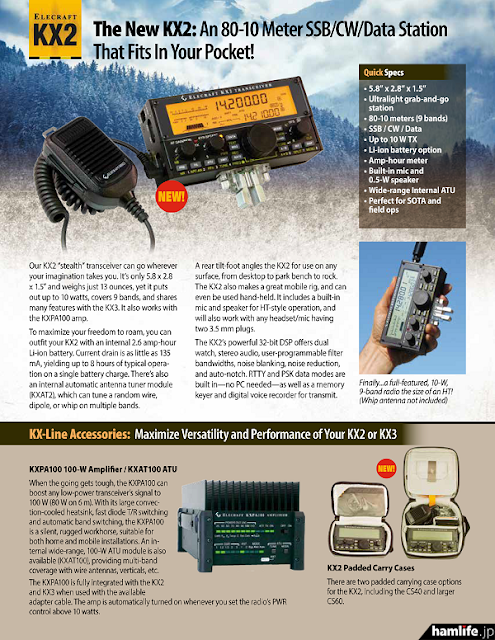 As Eric is scheduled to do a presentation at FDIM titled “Shrinking the Multi-Mode HF Transceiver”, this kind of fits right in, eh?

Right off the bat, I see a somewhat smaller rig - to my eye, not MTR sized, but smaller than the KX3. Two bands missing, 160 Meters and 6 Meters; and I'm sure a smaller price point. A Japanese Website (http://edcjp.sblo.jp/article/175341127.html) is listing $750 as the base price - not including tuner or any other accessories.

OK. Here's a photo from Facebook that puts the size issue in perspective. It IS substantially smaller than the KX3! In fact the KX3 looks like a monster compared to the KX2. Now I understand why this is offered "factory assembled" only.  This must be total SMD construction. 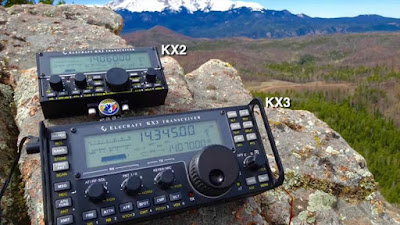 Very interesting. Ideal for the SOTA operator - maybe the LNR rigs were starting to cause a little diversification in the market?  As of right now, my KX3 is all I need and I personally don't anticipate a need ........ but ya never know. It would be nice to have one, though. Or even have one just to play with for a while.

Award-winning Hollywood producer and ARRL benefactor Dave Bell, W6AQ, of Encinitas, California, died on May 13. He was 84 and had been a radio amateur for 65 years. Bell had been suffering from cancer and was in hospice care. An ARRL Life Member and a former chair of the ARRL Public Relations Committee, Bell directed Amateur Radio Today and produced several other ham radio-related promotional videos and films, starting with The Ham’s Wide World, a TV documentary filmed in black and white.

“If I have a claim to fame in Amateur Radio, it’s probably that I produced the first television documentary about ham radio that got worldwide distribution, and then I made several others before I ‘retired’ from the ham radio film/video hobby-within-a-hobby and got busy making a living producing TV movies, specials, and documentaries for all of the networks including HBO and Showtime, and made a couple of theatrical feature films — Nadia and The Long Walk Home,” Bell recounted on his QRZ.com profile. He started TV’s Unsolved Mysteries, and he received an Emmy Award in 1985 for Outstanding Drama/Comedy Special, Do You Remember Love. Bell chronicled his filmmaking and his Amateur Radio and professional lives in a memoir, World’s Best Hobby.

Last year, Bell and his wife Sam, W6QLT (she’s a quilter), donated a signed Andy Warhol print to the ARRL. The artwork — “Myths: Superman 1981” —sold at auction last fall for $150,000. The proceeds are being used to create “The Dave Bell, W6AQ, Endowment Fund” to benefit the League.

Bell also produced The World of Amateur Radio, This is Ham Radio, and Moving Up to Amateur Radio. He directed the Amateur Radio Today video in 2002. The short presentation about emergency preparedness was narrated by former CBS Evening News anchor Walter Cronkite, KB2GSD (SK), written by Alan Kaul, W6RCL, and produced by Bill Pasternak, WA6ITF (SK) and Bill Baker, W1BKR. Bell and Pasternak also created The DIY Magic of Amateur Radio in 2011, and he co-produced The ARRL Goes to Washington, also voiced by Cronkite. Working on his own, Bell filmed videos for the World Radiosport Team Championship (WRTC) events in 2000 in Slovenia (The Ham Radio Olympics) and in 2002 in Finland.

A DXer, casual contester, and a past president of the Southern California DX Club, Bell was a frequent speaker at Amateur Radio gatherings. He was named the 1984 Ham of the Year at Dayton Hamvention®, and, in 2003, the ARRL presented Bell with its first Lifetime Achievement Award for his work on films and videos about Amateur Radio. In 2011 he was named to the CQ Amateur Radio Hall of Fame.

Heil Sound Ltd’s Bob Heil, K9EID, called Bell “one of the great ones.” Heil said Bell’s “great smile and laughter” and his “generosity to the hobby” would be missed, “but most of all, we will miss his spirit.” — Thanks to The Daily DX for some information

I've mentioned Dave's e-book "World's Best Hobby" several times before on this blog.  It used to be free, but i think now it can be downloaded from Amazon for a couple of bucks. It's worth substantially more than that, it's a good and entertaining read.

I hope W6AQ is up there with K2ORS, kicking back, quaffing a few and sharing some good stories.

Farewell, W6AQ, thanks for all you did for Amateur Radio.

I know I haven't posted much lately, so I'll check in, even though there's not much to tell.  Work was busy as heck last week, so I didn't get the opportunity to go out to the Jeep all week during lunch.  Not that I really would have, anyway.  It's been rainy and cool. A very untypical May.

The cool and dampness brought on another complication.  When I was very young, I suffered a severe bruise to the Achilles tendon in my right ankle.  Whenever it gets unseasonably cool and damp for a prolonged period, I am prone to a bout of tendinitis there. And last Wednesday, it started.  I've been limping around with an Ace ankle brace and have been applying Icy Hot lotion (I smell like a moth ball!). It's more discomfort than anything else, a real pain in the .............ankle.  On a scale of 1 to 10, the pain is probably about a 3 or 4, and it's only when I flex may ankle in a certain direction.

I have been trying to avoid steps as much as possible to prevent hyperextending the ligaments and tendons, so that has meant staying out of my basement shack.  I did go down one time this weekend to work Joe N2CX who was activating Valley Forge for NPOTA.  That was my only Ham Radio activity for the weekend ...... which sucks, big time.

If past bouts are any indication, in about another week I should be back to my old self.  It generally lasts about 7 to 10 days and Wednesday will be a week.  I really need to build or acquire a portable magnetic loop antenna (such as an Alex Loop) so I can set the KX3 up on the dining room table and still play at my favorite hobby.