February 19th and it was warm!  It felt more like a Spring day than the middle of Winter; as it reached a high of 68F (20C).So what does a relatively young man's fancy turn to when it warms up like this? Why, Amateur Radio of course!  In particular, portable QRP operating.  Too nice to stay cooped up inside, right?

I decided on a very impromptu activation of Washington Rock State Park, which is designated as KFF-1635 in WWFF (World Wide Flora and Fauna nomenclature). Probably not my brightest idea as it's the ARRL DX Contest weekend; but I decided to head out, anyway.  Before heading to the park, I had to stop by Dick's Sporting Goods to pick up some fishing swivels (with clasps). 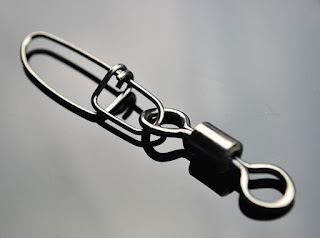 I use these to attach the "bullet" of my Joplin ARC Antenna Launcher to the fishing line. This allows me to quickly detach the projectile and attach in it's place the Mason's twine that I use as support rope during these activations.  A package of a hundred (a lifetime supply) cost all of about $5.

I got to the park and it appeared that everyone else from Central NJ had the same idea that I did! There was a small crowd at the park. It's very popular, because as I've mentioned before, Washington Rock is located on the first ridge of the Watchung Mountains and provides an unobstructed view of the NJ Shore and the Piedmont.  On a clear day, like today, it is even possible to see Manhattan and Staten Island with the help of binoculars or a telescope.  This is why General Washington used this spot during the Revolution.  By going up there at night, he was able to clearly see the campfires of all the British troop encampments.

But I digress.I found the last empty picnic table and claimed it by placing my equipment on top. Then I got to the business of hoisting the antenna.  Again, the Joplin ARC Launcher made this an easy task. I become a better shot each time out and once again, the "bullet" cleared the tree and went exactly where I wanted it to go.  The PAR END FEDZ 40/20/10 went up easily and within minutes, I was on the air.  Actually, I arrived at the park at about 1850 UTC and was calling CQ by 1900 UTC,

I really like the PAR END FEDZ 40/20/10, as it deploys easily and with the KX3's autotuner, it also loads up and seems to get out really well on 30 Meters and 17 Meters in addition to the three bands it was designed to operate on.

I started out on 40 Meters with no takers, despite spotting myself on DX Summit as well as the WWFF/POTA Facebook page.  That was a disappointment, as I was hoping for a decent amount of local activity.  At that time of the day, DX from Europe (and thus any contest QRM) is minimal, so I was hoping to work folks along the East coast and up into Canada. After about 20 minutes or so of no answers, I went up to 20 Meters.

Calling CQ POTA in the midst of the ARRL DX Contest was probably pure folly, but I did get answers. I worked S52A, EA8KW, S50Q, C6ARU, FY5KE and CO2JD at various points.  They were probably wondering what the heck "KFF1635" was. I think they probably just wanted the "599 NJ", but that's neither here or there.  They were QSOs made from the park; and they count whether they were looking specifically for me or not.

17 Meters yielded contacts with KG5CIK, WR2E and WB2MKX, both of whom were in New Jersey.

30 Meters was good for two contacts. One was with KA9CFD and the other was a half hour or so rag chew with N1KW, Bob in IL.  Bob was also enjoying the warm weather in Illinois and was in his back yard, using his K2 at 10 Watts straight off a solar panel - no battery.  I really enjoyed the QSO with Bob and it's made me anxious to try out the solar panel that I bought from Harbor Freight last October.  I purchased a voltage controller from Bangood, and once I wire it up, I should be able to get a good and steady 12 Volts on a decently bright day - more than enough to power the KX3.

After the rag chew with Bob, I realized I had been at the park for close to two hours, so I decided to pack up and head home while there was still plenty of light.  I did have a few people come up to me, asking me what I was doing. I was able to give Amateur Radio, QRP and portable operating a couple of good plugs.

With that, I'll close this post with a very short and hastily made video that I took just prior to tear down.  I apologize for the quality - Steve WG0AT has nothing to worry from me as far as video expertise goes. But maybe, just maybe, if I keep this up, I can get better at that, too.  Lord knows, I've come a long way from my first attempt at portable QRP ops!

It appears that in September of 2016, the ARRL formed a committee, looking into the possibility of petitioning the FCC to create a new entry level Amateur Radio license.  At this point, they are looking for membership input.

So if you're a member of the ARRL, please log in to their Web site and take a survey, by clicking here.

Personally, some of the best times I have had in Amateur Radio occurred when I was a Novice.  I learned so much, most of it by the Amateur Radio School of Hard Knocks.  So, I was very saddened when the FCC ditched the Novice license.  I thought this was an excellent way to enter the Amateur Radio world, with the focus on operating in the HF bands, not just VHF/UHF.  Not that there's anything wrong with VHF/UHF, but I think opening up the world of the HF bands is the way to go, keeping interests piqued and offering endless possibilities.

It will be interesting to see how this all pans out and if anything comes of it.