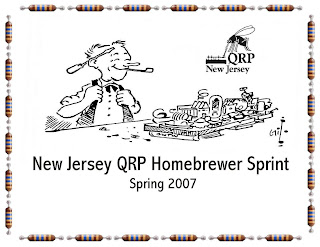 Boy, it seems and feels like forever since I've been on the radio; or much had time to even think about radio! Summer activities; then Back-To-School activities and the resumption of other projects have kept me off the air.

I scratch my head when I think about how I made a QSO every day for a solid year a few years back. I look at K3WWP's streak and I'm even more amazed. How did I do that? How does John continue to do it?

I was never a big John Lennon fan (although I did love the Beatles); but he was spot on when he said, "Life is what happens while you're busy making other plans".

Tonight, however, I'm looking forward to heading down the basement to get on the air for a while after the kids are in bed for the night. My wife Marianne is working until about Midnight; so I should have an hour or two of quiet time after bedtime and then the compulsory "picking up after the kids" is done for the night.

Geez, I hope 40 Meters is decent tonight! And I hope the bands are decent for tomorrow night! Don't forget the NJQRP Homebrewer Sprint tomorrow night - please find a way to get on, even if it's for a little bit to hand out some QSOs.
The care and feeding of this Sprint was handed over to me by Ken Newman N2CQ about a year ago. Participation has been dwindling the past few years. I would appreciate the help in bringing it back to life again!

Hey, just the anticipation over it has gotten my fire re-kindled; and I'm once again looking forward to getting on the air. Hope to hear you there.

It's that time of year, again! Time for the Fall edition of the NJQRP Homebrewer Sprint. It will be held this Sunday night (Monday morning UTC time). So put on your headphones, grab your key and come join us for a spell. Work a half-hour, work an hour, work all four! The point is to join in and have some fun!

This time, however, this will be a CW ONLY event, due to the lack of PSK-31 entries.

Mission: Promote homebrewed & homemade equipment on the air together. Kits are considered homebrew. Anyone with ANY equipment can enter; and is highly encouraged to do so!

When: The fourth Monday in March and in September, 0000-0400 UTC
(Sunday evening in USA/Canada)

Multiplier: State/Province/Country for all bands. The same station may be worked on more than one band for QSO points and
SPC credit.

Results: Sprint results will be published on the NJQRP Web pages

Logs: Entries must be received by 30 days from the contest. The log sheets and summary should be included. E-mail logs are accepted in text form. (No word processor files etc). Also paper logs are ok. Include an SASE or E-mail address for the results, if desired. Please include your Soapbox info with your equipment and exploits.

or send by email to w2lj@arrl.net

I didn't hear much except static crashes - no AGC isn't nice
on the eardrums! - VE3HUR

Where was the activity??? Quit after the first two hours for lack of
anyone to work. - N4BP

Thanks for a fun contest. But where did everyone go after 0200Z??? I guess conditions really went downhill after that, but tried to keep going right to the end. Big surprise was WB8LZG, who I was sure was QRO, he was so loud. Really enjoyed getting a 119 from Bulgaria! - KR1S

My 20m antenna isn't the greatest so I decided to fire up on 40m. I was hoping I'd find enough Qs there to keep me somewhat busy. However, that didn't turn out to be the case. Since I didn't have 80m in the K1, I decided to stick it out there on 40 for a bit but the sparce activity continued. I never did get to work any west coast stations. I heard K7TQ work N4BP but then he disappeared. Anyway, I thank the sponsor for this event and the opportunity to
work other homebrewers and play radio. - K8KFJ

Participation seemed light, or perhaps propagation only covered the East Coast. N4BP was loud as usual, but KD2MX was really booming in. Maybe I'm not a contester, since I quit at bedtime, but I was glad to catch this sprint. - AB1AV

The bands were very noisy and I lost a couple of potential QSOs in the QRN. Seemed like activity was way off from last year or conditions were worse then they seemed as QSOs were few and far between. - KD2MX

Thanks alot for sponsoring the event. Didn't hear much activity, but decided to send in a log anyway. - W5ESE