Rocks in my head 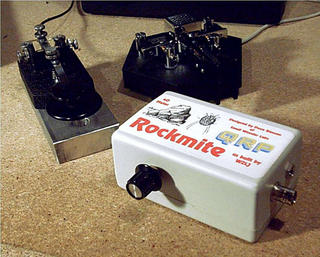 Last year, I purchased and assembled a Rockmite kit for 40 Meters. For those of you not familiar with the Rockmite series of transceivers; Rockmites are monoband radios that are crystal controlled and are capable of putting out about 250mW for the stock version.

I built my Rockmite last year; but then purchased my K2 and the Rockmite circuit board kind of fell on the wayside. Recently, I had put it in an enclosure and just tonight I had my first two QSOs with it.

This is really my first venture into the world of QRPp (output power of less than 1 Watt) and it was satisfying, exhilirating and a ton of fun. I called CQ for a bit to see what would happen; and was answered by Phil KC4QQ out of Lake City, TN. We had a nice QSO going until QRM and QSB did my flea power signal in. But it was a completed QSO, by the rules, as we did indeed exchange the basics - RST, name and QTH.

A few moments later I heard a station calling CQ and decided to give it my best shot. Frank NF8M out of Novi, Michigan was calling CQ and he signed NF8M/RM. John was using a Rockmite also! Since both rigs are crystal controlled and are on the same frequency; I figured he'd probably hear me call him. My hunch was correct! We exchanged names, QTHs, RSTs and antenna info. before Frank decided to go casting for other Rockmite users.

It is truly amazing how far 500 milliWatts can go! I received a solid 549 signal report from Frank, which is truly not bad at all. There are many times when I use the K2 with the full QRP Gallon (5 Watts !!!!) and get only a 559 report - so 549 was totally acceptable.

I haven't really done much QRPp work until tonight. I think I may be getting hooked! The fun and excitement and satisfaction equals any that I've ever received acquiring a new country with QRO power.