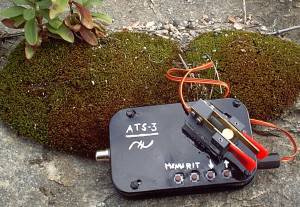 It is often said that as you get old the eyesight is the first to go. I have started building my ATS-3 transceiver kit ala' Steve Weber KD1JV. Working on this kit will put the above mentioned hypothesis to the test. This kit is 99% surface mount technology, or SMT as it is known.

SMT had to have been developed by masochists. The parts are so tiny that I'm pretty sure a grain of uncooked rice is bigger than some of these capacitors and resistors. All work is done with a tweezers and I have resorted to wearing one of those magnifying loupe headband thingies. My bifocals alone are not cutting muster.

The solder that Steve has supplied with the kit is so thin that it reminds me of a cat's whisker from the old crystal radio sets that I played with as a kid. Soldering is done carefully and methodically, all while trying to balance solder, soldering iron and a dental tool for holding parts down in two hands. After each component is soldered in, a visual inspecion is done with all the magnifiers flipped in place to make sure there are no solder bridges as well as no forgotten soldered joints. After the visual inspection is finished, I take an Ohmmeter and check for continuity from the component just soldered in to whatever pad or device that it is connected to.

Construction is definitely taking longer this way; but I want to make sure that if the radio doesn't hum on initial power-up, that it won't be due to some stupid soldering mistake that I may have unwittingly made.

If I can still see straight when I'm finished with this project; then I will consider myself to be a very fortunate Ham, indeed!