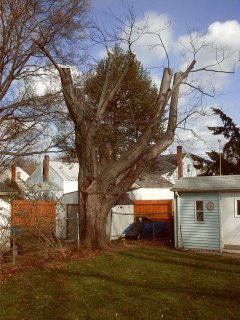 I am back in business - and have been for a week now. As you can see from the picture, my tree had a haircut. The top 20 feet were removed to provide less of a strain to the trunk. The tree is in pretty good health but has been weakened due to damage by squirrels and carpenter ants. The tree straddles my property and that of my neighbor. Neither of us wanted to get rid of the tree outright; we just want it to be safe. Neither of us needed branches falling on our kids; or even worse.

The center insulator for the G5RV is now at the very highest level this tree can now give me - 20 feet. It used to be at the 30 foot level and the tree itself used to be about 40 feet high.

It was hilarious getting the antenna rope back into the tree. I was using this thing called a "hyper dog" trainer which is basically a glorifed sling shot for tennis balls. The device was intended to allow you to chuck tennis balls for great distances; allowing your dog to chase and fetch the tennis balls, wearing itself out in the process.

It went where I wanted it to go on the first try.

In any event, my G5RV is back up. It's 10 feet lower than it used to be; but at least it's not lying on the ground anymore!