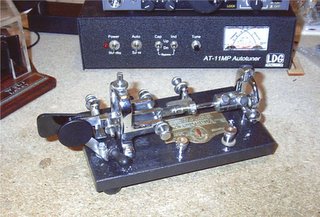 Now that my Vibroplex Original Standard has gone through its restoration process, via yours truly, now comes the time to hook the lil' bugger (pun intended) up and use it.

Hooking it up is the easy part. Using it is another thing, entirely. In actuality, it's not difficult to use at all. In fact, it's very much like using a keyer and paddles.

For the past 22 years, I have been using a keyer and paddles. I used to use a Bug many years ago; but it was MANY years ago! My brain is so used to touching a paddle lever and getting a series of dits and then touching the other paddle to get a series of dahs; that it has become ingrained.

Getting on the Bug the first time wasn't too bad. I pressed the lever in one direction and got a series of well formed and well designed dits. So far, so good. I pressed the lever in the other direction and got one well formed; but interminably long dah! Oh yes, that's right ... I AM THE ONE who has to manually make the dahs! Sorry, not used to that! The tendancy is to leave my finger on the lever way too long! Unfortunately, this is International Morse Code I'm dealing with and not American Morse. There are no extremely loooooong dahs in this system!

What to do? Practice, practice and practice some more! I have been sending imaginary exchanges to my keyer with its speaker turned on. This allows me to conveniently send "off the air". And after a few evenings, I judged that I didn't sound way too terribly. So I got on the air and called a CQ on 80 Meters. A guy came back to me and was actually able to decipher what I was sending! Wow!

In reality, while it's not terrible, I'm not comfortable with the way it sounds. My code with the Bug is still a little disjointed and stacatto. My fist is indeed, legible; but it doesn't "flow" at this point. It sounds more like the orchestra tuning up than playing the actual symphony. I pride myself on my Morse being "liquid" and being easy to listen to and decipher. Maybe I'm my own worst critic; but I am not happy ...... yet.