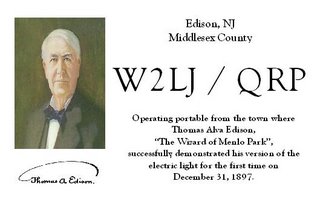 Today it reached about 75 degrees during luchtime; so I went outside and fired up the K1 at the back of my Ford Explorer. This time I had success!

I called CQ and was answered by John VE7CBU in Vancouver, British Columbia. Not bad for 5 Watts to a Hamstick mounted on top of an SUV!

I gave John a 589 and he gave me a 539. Then he proceeded to turn his power down to 5 Watts. Guess he wanted to give me a taste of my own medicine!

I had solid copy on him; which was rough on my part, but I managed. Unfortunately, I was not in the confines of my nice quiet shack located in my basement at home. I was in the parking lot at work, sans headphones while at the same time a freight train was blowing past me on the tracks which are located a couple hundred feet behind our building! It made it a tad rough for copying; but I guess that's what we portable QRPers live for! Next time, I'm going to have to remember to pack my headphones in the rig box.