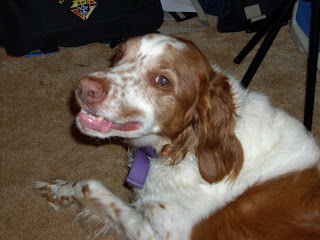 I got home today from work; and as I always do, I sat down to check out my e-mail

I received an e-mail about this blog; which for whatever reason, has been a more and more common occurrence lately. This e-mail, however, was from a soldier who is stationed in Iraq, who happens to also be a Ham. In his e-mail, he mentioned that he is a regular reader; and that my blog is one of the ways he keeps abreast of Amateur Radio. For those of you who don't know; Amateur Radio has been shut down in Iraq due to the problems with the insurgency.

Talk about an e-mail making your day! These soldiers, Marines, airmen and sailors who are serving our Country are my heroes! They have volunteered to put their bacon into the frying pan every day; just to keep your families and my family's lives safe and sound. What they are doing is of no small matter or import; and in my opinion they deserve way more than our thanks and support - WHATEVER side of the political spectrum you call home.

This gentleman and his family are putting up with a lot; and for him to say that my words are keeping him entertained in some small, minute way is such an honor! To all our servicemen and women ...... THANK YOU! Keep up the fantastic work. You guys are doing a terrific job no matter what the lame mainstream media believes and makes up ...... I mean "reports". Our best to you; and our prayers are with you for continued success in your mission and a safe and quick return home to a grateful Nation.

Now ...... on a completely unrelated matter; you guys should have seen the electrical storm we had here in NJ last night. I was awakened about 4:00 AM by my scared and almost hysterical dog. Jesse (picture above) is a Brittany; and he's VERY scared by thunder. It must hurt his ears. In any event, the storms passed through after about an hour or so; but until the rain finally came, we had an electrical storm like I haven't witnessed in maybe 10 or 15 years. The lightning was almost to the point of becoming continuous. The claps of thunder sounded like they were coming overhead; and several times there seemed to be no delay between the lightning and the thunder. That means the storm cell had to be located right in our general vicinity; and it was loud!

I thank God for three things. A - He got us through the storms safe and sound. B - The lightning didn't cause any damage to any radio equipment. No direct hits to antennas, which were disconnected, anyway. C - My kids slept through the storms! The only comforting I had to do was keep Jesse calm by petting him non-stop for practically the whole time. I never saw a dog who was almost ready to jump out of his fur!

The storms brought no relief and today's weather was hotter and stickier than yesterday. Temperatures were in the 90s, the humidity was WAY up there and the temperature humidity index was at 105 degrees for a time this afternoon. Boy, I hope tonight is a quieter night than last night. All I do know for sure is that the antennas are staying disconnected again tonight!