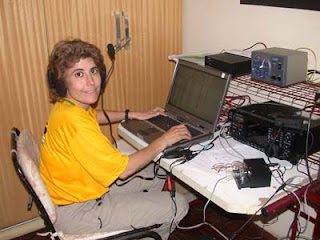 I went on over to the TX5C Website the other day, just for kicks to look it over again. My TX5C baseball shirt came through the mail from Cafe Press (I'm wearing it now).

I noticed a cool thing about the online log. If you put your cursor over the band spot you worked; it shows you which op put you in the log. I had the honor to be worked by Ann Santos WA1S, whose picture appears here.

I went and looked up her bio on QRZ, and this YL should definitely be in the "Who's Who" of Amateur Radio ops, if there were such a thing!

We were both licensed about the same time. I was licensed in 1978 and she was licensed in 1979. However, as an Amateur Radio op; Ann is light years ahead of me in experience and talent! Just from the DXpeditions she's been on, her passport book should be busting at the seams from Customs stamps. If she had one of those old valises like they had back in the 30s and 40s where folks would put stickers on from where they had been; then you probably wouldn't be able to see any of the leather of Ann's valise! There would be stickers everywhere.

Her pile up handling skills were top notch, par excellent! And she obviously has a great set of ears to be able to have pulled my 5 Watts out of the aether amidst the chaos of a bajillion stations screaming at her. Thanks a million for the contact, Ann!