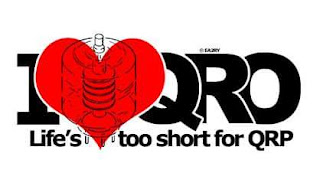 A lot of times ..... yes.  A lot of time the credit should go to the stations that pull out our sometimes weak signals. And for these times, we offer a hearty "Thank You!"

However, there's a popular and stubborn misconception, or premise here at work here, if you will:

Many times, this IS the case, but many times IT IS NOT.

This is where propagation and band conditions come into play, my friends.  And if you've spent any time at all on the HF bands, you would know better than to make the above statement, because a weak signal can be produced by any station. It's not necessarily an indicator of how much power they're running.

Many have been the times when I've had problems pulling a 100 Watt or better signal out of the muck. This could be due to the fact that the station I was trying to work was in the skip zone, the band on which we were working was only "so-so" that day, or for a plethora of other reasons.

Many have been the times when other QRPers have literally blown the cans off my ears with their 5 Watt signals (N9NE comes to mind, on a regular basis). So in the end, you really can't "'judge the book by its cover", nor make assumptions about the station based on the loudness of its signal.

The station that's pinning your needle just might be a QRPer, while the station that you can barely hear may be running a kilowatt.  It's all in the antenna, the band, and the ionosphere, and how all these elements are interacting at the moment.

So what's the lesson to be learned?

1) Don't be afraid to try and work the weak ones.  I have been guilty of this myself.  There have been instances where I thought "Oh, this guy is never going to hear my 5 Watts!", only to find out that he was running 100 Watts, or better ........ but for whatever reason, he was hearing me much better than I was hearing him.

2) Propagation is not always reciprocal. (This is #1 in reverse.)  Just because the station you are hearing is 20 dB over 9 doesn't necessarily mean you will be heard equally as well at their end.  There may be a high background noise level on their end that you don't know about.  Yes, it IS frustrating as all get out, but don't beat yourself up because the "loud one" didn't hear you. Sometimes, it just works out that way.

3) Power is relative, but it's not an absolute. So as I've said so many times before, you should just forget that you're a QRPer. You're just another fish in the Amateur Radio sea. A smaller fish for sure, but just another fish. And sometimes, just sometimes, the smaller fish gets away with snagging the bait and swimming away to play another day, while the big fish gets snagged by the hook and ends up on the dinner plate.