Remember that TV commercial from the 1970s?  I think it was for Jif peanut butter. Basically, the point was that the peanut butter company removes the little "nib" from between the two peanut halves before processing, because including them taints the sweetness of the peanut butter.

I had to deal with a bunch of nibs yesterday during the NoGA Peanut Power Sprint.  My "nibs" were RTTY stations on 40 Meters that pretty much made the band useless for CW. I believe it was the CQ WW RTTY contest that was in full bloom, with RTTY stations going right down to the very band edge.

There was a time, way back in the 90's, that Digital ops respected a line around 7.055 MHz or so - where they would go no lower in order not to disrupt CW operations on the band.  And I would know as I was pretty heavy into RTTY and the TOR modes at the time. I see that "gentleman's agreement" has been pretty much shot to Hades. 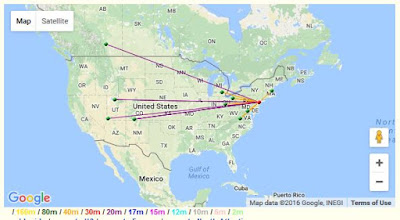 20 Meters was in good shape, however, so that took away the sting of not being able to make many contacts on 40 Meters.  When all was said and done, I made 25 contacts, most of which occurred on 20 Meters. Without having my log to refer to, I believe only 5 QSOs happened on 40 Meters.

The smart one was Marc W4MPS in North Carolina.  Marc was able to find this little tiny spot between two very strong digital ops, and he just ran the frequency like the pro that he is. Most of my 40 Meters contacts were from searching and pouncing. I tried calling CQ for a while on 40 Meters, but it proved to pretty much just be a waste of time.

My best contact on 20 Meters was with a station in Washington State.  Again, without my log in front of me, the call escapes me - it was an N7 station - that much I remember. Anyway, he was about 20 over 9 to me in NJ.  20 over 9 with only 5 Watts from 3,000 miles away. He almost knocked the earbuds right out of my ears. So much for the "QRP equals weak signals" argument!

And that's an argument that needed to be refuted on Facebook again this morning.  On the "100 Watts and a Wire" page - someone asked how many members are truly QRP.  In the middle of the answers, a German op came on with the old "It's all in the listening station" fallacy" again. "The better question to ask is, Who has a big enough station to hear QRP.?"

Obviously, I had a big enough station to hear QRP signals yesterday; and all I was using was a KX3 and a PAR END FEDZ 40/20/10. And if I could hear QRP stations just fine with that - then what's anyone else's excuse?

The excuse turns out to be that there are a plethora of Hams out there who really don't understand propagation and antennas.  They believe that power is everything, and as it turns out, nothing could be farther from the truth.