The Night of the Living Dead

Otherwise known as the Zombie Shuffle is on for 2016. Woot! 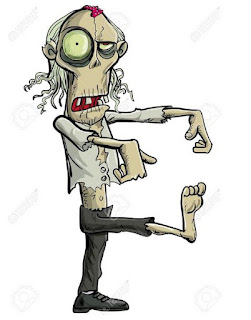 As announced on QRP-L by Paul NA5N:

RULE CHANGE: The Zombie Shuffle will begin at 1600 local time instead of the former 1800 sundown by request from several Zombies. This is to give participants more time on 20M to make contacts before we're forced to the rats nest on 40M.

If you've never participated in the Zombie Shuffle, by all means do so. There is no purpose to the ZS except to get on the air and wrack up a ridiculously high score, based more on serendipity than code speed or operating skill. So dust off your key and be a QRP Zombie.

If you are new to the ZS and need a Zombie number assigned (they are good for life), email the Grand Witchess at n0qt@zianet.com

With the sun very quiet lately, hopefully we won't be having any geomagnetic storms this year for a bit quieter 40M.

This is great news for me, as I thought the Shuffle was going to be held the following Friday, the 28th (which would put it closer to Halloween).  I have a Radio Club meeting that night and would not be able to participate until the bulk of activity is over.  As Recording Secretary, I really should be at the meeting.  With that conflict out of the way, I can shuffle along with the other Zombies!

Is there a better way to end a hectic week than by playing QRP with your friends on a Friday night?