on another small mobile radio from China.  I got fooled when I purchased the Juentai JT-6188, but decided to take another chance.  This time I picked up a QYT KT-8900R. 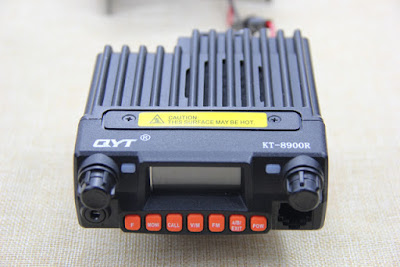 Same size and looks almost identical to the Juentai.  For all I know, one factory is making all these radios that fall under different name plates.

This time it's been a semi-success!  The radio works just fine, fits in the Jeep well, has ample and good sounding audio output.  It's nice to have it where my Icom was and not constantly bang my knee into it.  It does NOT have the "picket fence" audio problem that the Juentai had when my vehicle is in motion. (The Juentai serves as my shack VHF/UHF as it works fine when not in motion.)

The only slight problem is that for some reason the computer programming doesn't work. Using the QYT software or Chirp, it doesn't seem to matter. The error I get with Chirp is that the radio "won't go into cloning mode". I think that's probably a Windows 10 issue, because the Juentai programmed easily enough with Windows 7.

However, that's not a big deal, as this one is pretty darn easy to program using the buttons on the microphone and the radio itself.  There is one hitch that was driving me crazy, but that was explained in this video, at the very end. (YouTube to the rescue!)

So, if you're in need a capable (lower powered - 20W max) radio and you don't have an Icom, Yaesu or Kenwood budget - this little guy will serve you in good stead.