Saturday was a very busy, busy day for me.  I was determined to do "not much of anything" on Sunday, as a result of that busy-ness. It was still chilly in the basement; so I brought the magloop upstairs to do a little experimenting

First off, in my mind, the loop has proven itself as a viable performer on 20 Meters.  I have made several trans-Continental and trans-Oceanic QSOs with it.  However, I have not used the loop much on 40 Meters, or any of the other bands at all, if I remember correctly.

That said, I was itching to log some QSOs, so I started out on 20 Meters, where my previous success had been.  I was disappointed as I didn't hear many signals; and the ones I did hear were weak and watery.  On the bright side, I was able to find the "sweet spot" on the tuning capacitor as easily as I did before and it was pretty easy to bring the SWR down to about 1.2:1.

So I hopped to 40, 30 and 17 Meters, respectively.  On each band I was able to find the "sweet spot" on the tuning capacitor with ease.  The background noise would peak very easily and some careful tuning back and forth resulted in very respectable SWRs on each band.  But again, 17 and 30 Meters seemed to both be pretty dead.

40 Meters had a few loud signals; but it seemed everyone I heard was already in QSO. I wasn't able to hear anyone calling CQ.  Because of that, I called CQ on both 20 and 40 Meters.  No answers on 40 Meters, but there was a very weak answer on 20 Meters.  I could tell that a station was calling me; but I just could not pull them out of the background noise.  Whoever that might have been, I apologize.

In all I spent about 45 minutes playing around, mostly just band switching to see how quickly I could tune the loop after band/frequency hops.  Even with the 6:1 reduction drive installed, it was not long at all before I was ready to go after making a change.

Here's an RBN map of where my CQs were being heard: 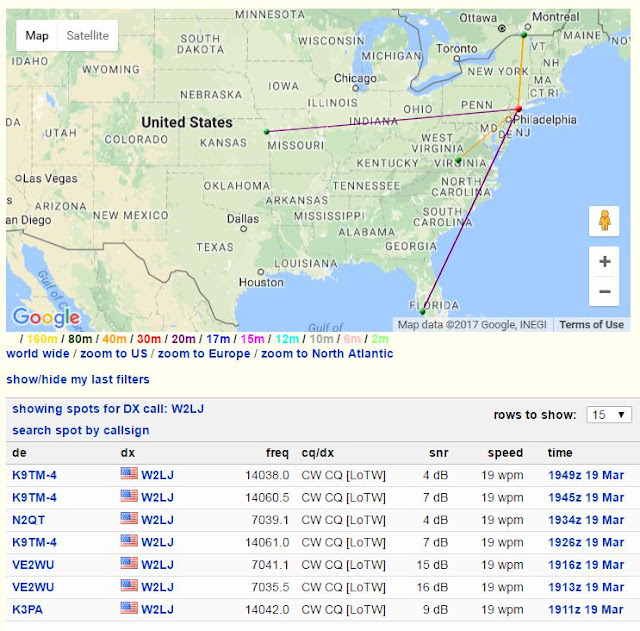 Disappointed by the band conditions, I headed down to the basement shack to see if perhaps it was the antenna instead of the band being dead.  Nope - the Butternut HF9V and the W3EDP weren't hearing any better, if at all.  Just another one of those days of when you want to get on the air; but there's just not much doing.