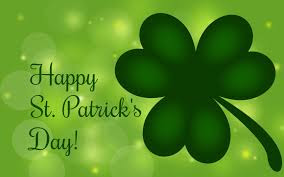 Sort of - more of a personal story; and believe it or not, one that DOES have something to do with Amateur Radio.

Flashback to 1997, the year I met my wife, Marianne.  We had dated a few times before that fateful event that every boyfriend goes through - meeting the girlfriend's parents. My future in-laws were great!  We got along and loved each other very much, but of course when you meet them for the very first time, you never know how it's going to turn out.

As I recall the incident now, I was sitting at my in-law's kitchen table. We had finished eating something and we were sitting around, shooting the breeze. We were just making harmless small talk when somehow, and for some reason, I had mentioned that I was an Amateur Radio operator.

My future Mother-In-Law, who was Irish - and I mean Irish (born in Donegal) came to complete dead silence.  I had gotten a strange look, and I felt the room in the temperature drop about 20 degrees.

"You're a radio operator, you say?" she asked in her distinctive Irish brogue.

I responded in the affirmative and then explained my small station, my two small antennas and the various things that I liked to do in the hobby. The response that I got was non-committal in either way, not unfavorable; but not enthusiastic, either.

Later on, I asked Marianne what that was all about. It was then that I got the story. Her uncle, Lawrence McCrea, who was my future Mother-In-Law's brother-in-law, was a farmer in Ireland. He was also a Ham. More about this in a bit. Uncle Larry had a big farm and he also had a big antenna on a tower right next to the farmhouse. One day, during a thunderstorm, Uncle Larry's tower took a direct lightning strike and the farmhouse suffered from quite the fire as a result.

In my Mother-In-Law's mind, that meant every Amateur Radio antenna, no matter what kind it is, is automatically a magnet for lightning. She was deathly afraid that I would bring fire down upon whatever house we would purchase in the future.

Many years later, back in 2009 or so, my Mother-In-Law would suffer a fall which resulted in a broken hip. After her surgery, she came to live with us for a period of three months. I don't think she was too happy about staying with us, knowing that there were antennas involved! She never said anything about it to me directly, but I think that was always in the back of her mind. She went on to live in Senior housing, very independently for another three years. We lost my Mom and my Mother-In-Law the same year, in 2012. I miss them both, so much!

I have no idea what Uncle Larry's call sign was. I never met him; and I think he might have been a Silent Key by the time Marianne and I got married. All I know was that he lived in the area of Donegal in Ireland.  Marianne has since informed me that he was from Abbeylands, Ballyshannon, County Donegal.

If there are any Hams out there, particularly Irish Hams who might have worked him, or might have known him, I'd appreciate hearing from you. If anyone has a QSL card from Lawrence McCrea and could fire off a scanned copy to me, I'd really love that!

In any event, to all my friends, particularly my Irish friends - Happy St. Partick's Day!


May the blessing of God's soft rain be on you,
Falling gently on your head, refreshing your soul
With the sweetness of little flowers newly blooming.
May the strength of the winds of Heaven bless you,
Carrying the rain to wash your spirit clean
Sparkling after in the sunlight.
May the blessing of God's earth be on you,
And as you walk the roads,
May you always have a kind word
for those you meet.