It's not often that you wake up on a Saturday morning and experience something exciting that warms your heart to boot. Today was one of those mornings. Today was our club's monthly Volunteer Examiner Session.

We had three unlicensed people come in to take the Technician Class license exam. All three passed; and that in itself was gratifying. As usual, when a candidate passes the Tech exam, they automatically get an invitation to take the General Class exam. We tell the candidates, right off the bat, that if they haven't looked at the General Class License Manual, to expect to only get about 30-40% of the questions correctly answered. The important point is that they will have seen the exam, and when they study to upgrade, they'll have a better feeling on areas they may need to especially concentrate on.

The first two candidates did as expected and were pleased to go home with their CSCE (Certificate of Successful Completion of an Exam), hoping their call signs would show up in the FCC database some time later this week.

Our third candidate was special - he got 33 out of 35 answers correct! Not only did he earn his Technician, but also his General in the same sitting. Hoping that lightning would strike a third time, we encouraged Doug (his name) to give the Extra exam a shot.  He was hesitant at first, but then decided to give it a go.

Before he started, he asked to use the rest room and we found out a bit more about him. Doug's an engineer by profession, so that says a lot right there. But we also found out that he was a lapsed Ham. He got his ticket in high school way back in the 60s. His call sign was WB2GVE and he had upgraded to Advanced class before career and family pre-occupied his time so much that his license lapsed.

As soon as I heard that he had an Advanced Class license I had a gut feeling that he would pass the Extra this morning. In my 40 year career as a Ham, the Advanced Class exam was by far THE toughest of them all. The Extra Class exam was a cake walk, by comparison. It's a little tougher now that they did away with the 20 WPM Morse Code requirement; but it's still easier than the Advanced.

Doug came back in, sat down and got to work. About a 1/2 hour later or so, he sighed and handed in his exam and answer sheet. He was not optimistic; but I was. A few minutes later, I was able to tell him that he did indeed earn his Extra with some room to spare. To say that he was elated is an understatement. He was flabbergasted and the whole exam team was beaming from ear to ear.

With the exception of a couple of us, this was our (my) first time that a person has gone from unlicensed to Amateur Extra in one sitting. I'm sure it wasn't as gratifying for us as it was for Doug; but it was sure darn close!

And there's icing on the cake! Doug lives in South Plainfield, so he was heavily encouraged to join SPARC, where he will be welcomed with open arms. Icing on the icing (or maybe ice cream on the cake)? He's interested in QRP !!! Now THAT went a long way to make my morning!

And....... all THAT came after finding out last night that SPARC came in 4th Place, Nationwide, in our classification for Field Day. 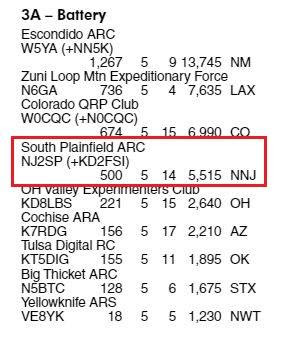 So, without even so much as touching a key, or twiddling a knob, it's been a very good Amateur Radio weekend, so far.