Trying to do not too much today.  It is rainy and cool and I am trying to rest my right foot.  Yep, I messed it up again, pretty much like last year, excepting this time I did a pretty good number on my ankle, too.  So once again, I am wearing "the Boot" and probably will be for the next couple of weeks.

Anyway, I was going through the computer, looking at old photos when I came across this old shack photo.  It has to be pre-2003 from before I went 100% QRP: 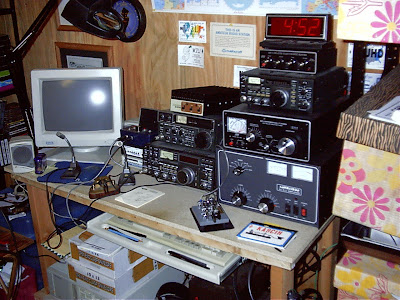 Geez, there's a lot of stuff there!  An Icom IC-751A with an Icom all mode 2 Meter rig, an IC-251A above it.  On top of that was a brick amplifier for the IC-251A.  To the right was an Ameritron amplifier (yes, I actually had one and used it, probably all about 25 times or so).  Above it was the high power antenna tuner. Above that was my QRP rig, an Icom IC-730 that I had modified so that I could lower it to the 100 mW level - sorry I ever got rid of that radio!  Above that was some sort of MFJ memory keyer that I don't even remember having! 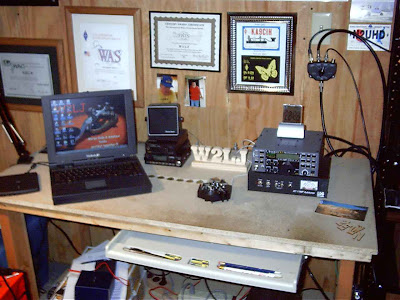 I pretty much sold most of the other station off to buy the K2 among other things.  I don't have the external autotuner anymore as I eventually purchased, built and installed the KAT2.  The station is pretty much the same today with the addition of a few other keys besides the Hex key.

Email ThisBlogThis!Share to TwitterShare to FacebookShare to Pinterest
Labels: nostalgia