15 Meters seems to be decent lately

First, before a brief discussion of 15 Meters, I'd like to share a video on QRP - actually it's HamRadioNow Episode 93 - "QRP (Life's Long Enough .......).  This was pointed out by Norm WA4ZXV on the nogaqrp e-mail reflector.

The episode is about an hour long, though, so before starting it, you might want to pop some popcorn and open up a cold one and get comfortable for a bit.  (It's instances like this where tablets and other hand held devices really soar!)


Now on to 15 Meters.  The past few days during lunch, I have been noticing some very loud signals on 15 Meters, even though various propagation tables have been calling for only "fair" conditions on the band. There were a few loud Europeans and South Americans on the band, but I was being beat out in the pileups by stronger signals (Them's the breaks).  Rather than give up on the band totally, I decided to go on up to venerable ol' 21.060 MHz and put out the CQ call for a lil' bit.

I was rewarded with a call from Bert F6HKA who is very well known on the CW portions of the bands. Bert and I have QSO'ed before, but always in a contest situation.  It was nice to be able to spend a few minutes with him today, actually chatting for a bit. 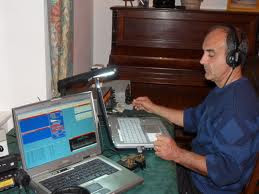 Bert was operating from Limoges, France.  It was a 2X QRP QSO, which made my day.  Bert had the advantage with a beam up at 75 feet.  It really helped to pull my KX3 and Buddistick out of the noise.  Bert was 569 in New Jersey and I received a 539 in return.  But fortunately, even with a little QSB, solid copy was achieved at both ends.

So even when the propagation gurus say a band isn't in the best of shape, it never hurts to put out a CQ.  You might get skunked, but then again, you might be rewarded with a gem of a QSO like the one I had with Bert.