Yesterday morning, I joined the other VEs from the ETS of NJ Club, as Amateur Radio exams began again after the annual summer hiatus.  Exams are given monthly at the Union County College Campus in Cranford, NJ.  Here's a photo that was taken of the VE Team by one of the new Technicians after the exam session had ended. 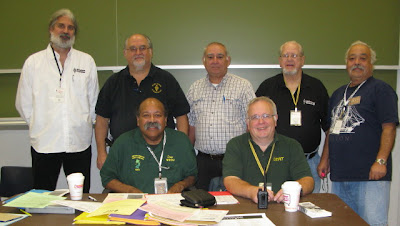 That's me sitting on the right, and next to my cup of Dunkin' Donuts coffee is the new radio, a Baofeng UV-3R+ from Amazon.com for $29.  It's a tiny pocket sized VHF/UHF radio, and once again, I bought it not so much to transmit, as to listen.  I take it with me on my daily walks with Harold - it makes them less tedious. Length and width-wise, it's not much bigger than an Altoids tin. It is thicker, though. It fits in any pants pocket quite easily, so I can pretty much have it with me just about all the time I am not at work. 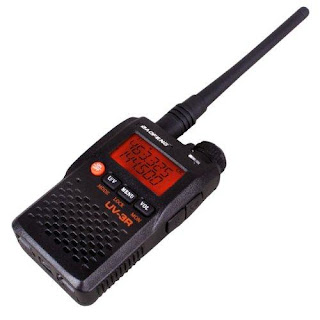 It's not the greatest radio, but not the worst, either.  For $29, I can't complain.  If it was a receive only scanner, it would still be the cheapest "new" scanner that I have ever purchased.  For what I intend to use it for, it was a good deal.  When I came into this hobby back in 1978, I never thought I would see the day of "disposable" HTs!

The few times that I have spoken with it, I have received good audio reports.  I have read some reviews where replacing the stock "rubber duck" has markedly improved the radio's performance, so I picked up a compatible Diamond model off of eBay yesterday.

I've stated many times that I'm not really a big VHF/UHF guy, but I do like to listen.  There are some interesting conversations that take place, and listening helps pass the time.