Tonight is my turn to serve as one of the two Foxes in the 20 Meter QRP Fox hunt.  If you have absolutely no idea what I'm talking about - they say a picture is worth a thousand words: 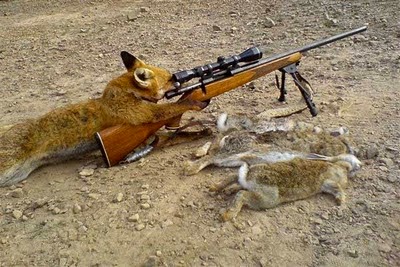 No, no, no, no - not quite, but let me give you the lowdown, if you're not quite familiar with the concept of QRP Fox hunting, and want to give it a shot. For the "official" rules, please check out: www.qrpfoxhunt.org/

Your job, as one of the Hounds, is to find us and work us - both.  Don and I will both be working split, that is, transmitting on one frequency and listening on another.  Just like W1AW/XX and DXpeditions and rare DX do. Once you find us, you have to figure out where we're listening. Once you think you have the spot - and ONLY then, I might add, you will throw out your call sign. Please! Only once or twice - not over and over until the cows come home! The QRP Fox hunts are a great place for learning and practicing pile up discipline.You know ..... the DX Code of Conduct.

The Fox will announce the call sign he has heard and will send his exchange to that station like in this example - let's say I pick out AB9CA's call from the pack of Hounds. I will send:

I am saying that I have heard you, AB9CA, your RST is 559, and that I am in NJ and my name is Larry and that I am transmitting using 5 Watts.  Once AB9CA hears my half of the exchange, he will come back with something on the order of:

He's telling me that my RST is also 559, that his name is Dave, that his QTH is AL and that he's also transmitting using 5 Watts.  ONLY when I acknowledge him with a "TU" and then send a "QRZ?" asking for the next station, is the exchange completed.  If he does not hear my "TU", then he either has to listen for my fill request(s), or try again later as the exchange was not completed.  Only when both Fox and Hound receive their exchanges, is there a valid QSO. This is known as "grabbing a pelt" amongst us Fox hunters. If you work only one Fox, you have a "One-fer", work both and you have a coveted "Two-fer". And believe me, due to band conditions, there will be times you will walk away with a "One-fer" and will be quite happy with it!

That being said, you really do have to try and work both Foxes in a 90 minute period, from 0100 - 0230 UTC. Here on the East coast, that's from 9:00 to 10:30 PM.  If you're located in the middle of the country, you probably stand a good shot, as I am in NJ and Don is in CA.  East coast stations may not be able to hear me, especially if the band is long.  West coast stations may not hear Don.  BUT ..... the theory has been known to go out the window compared to reality - so who knows?  Even though it shouldn't happen, I just might be able to hear up and down the East coast as well as the rest of the US and Canada. It's happened before! And don't give up just because you might not hear either one or both Foxes. Band conditions have known to change at the last minute. I can personally tell you that there have been times that I have not heard a Fox for 80 of the 90 minutes of the hunt, only to have him pop his little fuzzy head out of the woods for the last 10 minutes. If I had QRT'ed early, I would have been out of luck. There have been a time or two where I was the last Hound in the hunt to grab a pelt. Persistence can pay off here - big time.

Foxes tend to send Morse at a speed around 20 WPM.  But please don't feel intimated by that.  If you are comfortable sending and copying at 15 WPM, 12 WPM or even 5 WPM - please call me anyway!  I will slow down for you.

Why should you join in on the QRP Fox hunts?  First off, they are fun! Lots of fun. Secondly, participating will increase your skill sets (buzz word alert!). You'll find your Morse Code speed increasing and maybe more importantly, your skill in dealing with pile ups will increase dramatically.  I have been participating in the QRP Fox hunts since my call sign was N2ELW - and after a hiatus, have been participating as both a Hound and a Fox continuously since 2003.  My ability to work DXpeditions, special events, scarce DX has increased by light years.  The success I have in DX chasing as a QRPer, I owe directly to the training ground of the QRP Fox hunts. 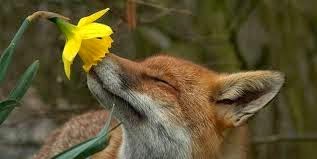 So don't be intimidated by the pileup or the code speed. Jump in and give it a go. The fun you will have and the sense of accomplishment from "grabbing a pelt" or two is worth the effort you'll put in.