The bands are slipping

Band conditions seem to have vastly deteriorated from what they were just a few months ago. It's not that propagation is non-existent, it's just that it seems to have left us in a bigger hurry than I would have thought. 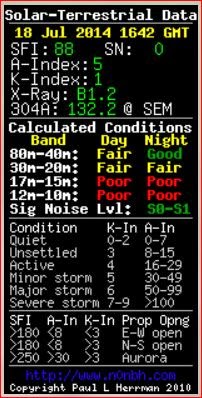 I went out at lunchtime today (around 1730Z) to find activity on 15 Meters to be nil.  A quick scan of 17 Meters revealed not so much.  Just a few months ago, both these bands were hopping with all kinds of DX. It wasn't all that rare to hear Europe, South America and Asia all at the same time! It wasn't all that rare to hear a good amount of activity on 12 and 10 Meters just a few short months ago.

Since 15 and 17 seemed inactive, I went to 14.061 MHz and called CQ after QRLing to make sure the frequency was dead.  I was answered by fellow New Jerseyan, QRPer and blogger, Chris KQ2RP who gave me a 559 from Maine.

After that, I worked fellow Polar Bear, Ken WA8REI who is having a hard time enduring the heat and humidity in Michigan.  It's hard to put up with the Temperature Humidity Index when you have so much fur! ;-)  Ken was a good solid 579 here when the QSB wasn't wreaking havoc. We had a nice little chat and then it was time for Ken to go, and my available lunchtime minutes were growing short, too.

Before heading in, I decided to check out 17 Meters one more time.  There, blasting in at 599+ was GA14CG, the Special Event Station for the 2014 Commonwealth Games in Scotland.  There was a bit of a pileup, but he was so loud that I figured that I could work him, if only I could place myself correctly.

With time running short, I was able to eventually find the right spot.  GA14CG was using the ol' racetrack pattern scheme. Start at a frequency, move a bit higher after each call, reach a high point and then continue to work stations, moving a bit lower after each QSO until arriving at starting point and starting the process all over again. Essentially, he was doing laps, which I guess was appropriate considering it's the Commonwealth Games.  I placed myself correctly on the return trip home and got into the log. They're on the air until August 3rd, so you have plenty of time to work them.