The days leading up to Christmas were busy. Dave busied himself by working with the Technical Committee of the Twin Counties Amateur Radio Club to try and solve a problem with the club's repeater. It seems the members would be bothered by an intermittent hash or raspy static at times. Dave, with the help of the other members of the Technical Committee basically took apart and rebuilt the entire repeater, component by component. The checked every connection on the receiver, transmitter, duplexer and just about everywhere else, looking for something obvious. Unfortunately, it seems like it's never anything obvious in cases like these.  They changed connectors, jumper cables and even replaced a few suspect capacitors in the power supply. They hoped it would be enough to alleviate the situation. The only other areas left for troubleshooting were the antenna, tower and feed-line itself. Looking at those during the current were weather pattern were not an option. 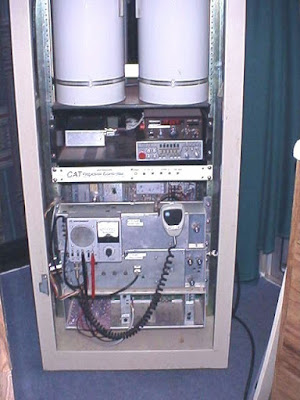 It had been snowing everyday since Dave had arrived home from school. Some days more, some days less, but it was still beginning to pile up, even by Springdale standards. This winter was shaping up to be one of the snowiest in Dave's young memory. It made for hazardous driving, but if you took your time and were careful, it wasn't a problem.

Dave was finishing up work on the repeater when he looked at his watch. It was 1:00 PM on Christmas Eve.

“Holy Smokes, Bob, I lost track of the time! I have to get out of here!”

Dave had been working with Bob, KB2VMG. “You're right, Dave, it's getting late. Time files when you're having fun, don't it?” Bob jokingly answered with a wry smile on his face. He was glad they were nearly done, too. Troubleshooting these kind of problems was always a challenge, and sometimes a headache.

“You're headed over to George N2EBA's QTH for dinner tonight, right?”

“That's right Bob.  My family and AA2AJ's will all be there.”

“Well, you have a great time. Get going. You and Jimmy are all George ever talks about. He's so proud of the both of you and all.  Tell him I said “Hello and Merry Christmas.”

Dave blushed a little and said, “Thanks, Bob.  You're all right finishing things up here by yourself? Dinner's not for a while, but I still have a few presents to buy.”

“Don't trouble yourself, Dave.  I just need to put the tools away and wash up. Everything is done here. Between you and me, I think we got the problem licked. Thanks for all your help – I don't think I would have noticed that iffy filter capacitor on the power supply if it weren't for your second set of eyes.”

“Merry Christmas, Bob – to you and your family. I'll see you next week at the regular club meeting.”

Dave set off for his Mother's car and went into town. He needed to buy gifts for his mom and sister, and it was still a new experience for him. Being alone with just his Dad for so many years, he still drew a blank at times when it came to buying gifts for females.  But in this case, he was lucky as he knew exactly what he wanted. A down vest for Maria to wear when she went skiing and some scented candles and soaps for Donna.  They were both pretty easy to buy for. Within an hour or two, he had made his purchases.

As he was driving home, the HT in his pocket came to life.

He pulled over to the side of the road. “Don't need to get a ticket for distracted driving on Christmas Eve.” he thought to himself.  “KD2JMJ, this is AA2AM – what's up Dad?”

“His Dad answered, “Davey, I just wanted to give you a heads up. I'm going to have to pick up the beagle late this afternoon. The lady from the shelter in Pleasanton is closing the place early, but she gave me her home address. She's bringing Barney home with her and I'll pick him up from her house. I'll have to leave dinner from the Mason's early though.”

“Isn't that going to be kind of obvious, Dad?  Mom's going to know something's up.”

“Got that all worked out, Davey. Fred from work is going to call me on my cell phone at 6:00 PM. By then we should have finished dinner. A “work emergency” that needs my presence will be the pretense. I'll just head out, pick up Barney and head back home. I should be home by 9:00 PM at the latest.”

“OK, Dad. I'll cover for you, later when the “work emergency” rears its ugly head. I'm just on my way home now. I'll see you in a bit. I think we worked out that problem with the repeater. I think it was either a bad ground or a bad jumper cable. Possibly even a bad filter capacitor in the power supply. The repeater hasn't hashed while we've been on.”

“Very good, Davey! Hey, I guess this EE education I'm paying for is working out!” His Dad loved teasing his son, even though he was practically a full grown adult now.  “See you in a bit, son.  AA2AM, this KD2JMJ, clear. 73, Dave.”

Dinner at the Mason's was as spectacular as everyone thought it would be. There was enough food to feed the 8th Infantry Division with leftovers to spare. And it was all exceedingly delicious. The Boltons, the Masons and the Stapletons thoroughly enjoyed each others company and the evening.

Everyone agreed to meet at the Bolton's house the next morning for Christmas brunch after Mass.  As everyone was sitting down to dessert and coffee in the living room, Jason Bolton's cell phone rang, as on cue.

“Jason Bolton, speaking. May I help you?” Of course, Fred was on the other end, allowing Jason the opportunity to play the charade out.

“The router and switch are totally down? I'm not sure what I can do at this hour on Christmas Eve. All the techs have probably left the data center for the holiday.  Looks like I'll have to come in and reset them.”

“What's the matter honey?” Donna asked, “Something wrong at work?”

“Yes, dear” Jason answered in feigned exasperation. “One of our client's routers and switches went down at the data center. None of their office door card readers are working and their Security department wants them reset right away. Looks like I'll have to go in.”

Jason looked at his watch. “Well, it's 6 O'clock now. By the time I get there, reset the equipment and then babysit them out for a bit – I should be home by 9 O'clock at the latest, I would think.”

“Well, just be careful, Honey”, Donna said. “I don't like the idea of you out on these roads so late on Christmas Eve.”

“Everything will be fine, Donna. I'll see you in a while. Davey, you monitor the repeater, OK? If I run into any trouble, I'll give you a call. Merry Christmas, everyone! See you at our house tomorrow morning.”

With that, Jason Bolton took off for Pleasanton. The drive went quietly and uneventful. The roads were not all that busy, as everyone was already home for Christmas already. He found the address easily enough and knocked on the door.

“Mr. Bolton! I'm so happy to see you and so is Barney.”  Barney came bounding up and jumped up onto Jason when he saw him come in the door. His tail was wagging ferociously and he was practically doing somersaults.

“He looks happy to see me.” Jason said. 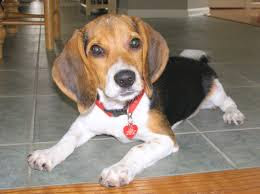 “Oh yes, Mr. Bolton. Barney is such a good boy. I think he's going to love his new forever home. Let me get you his papers and the carrier.”

Mrs. Buckley was gone for a few minutes and Jason bent down to play with Barney. Barney was alternately licking his face, and then laying down on his back so Jason could give him a tummy rub.

He was laughing softly to himself, thinking “You, my little friend, are going to melt Donna's heart!”

“Here you go, Mr. Bolton! Here are Barney's vaccination and neutering records, as well as the paper about the microchip under his skin. You'll have to call or e-mail the company to let them know your family is now Barney's forever family.”

Jason handed Mrs. Buckley the adoption donation, signed a few papers and then the two of them put Barney into his carrier. That was no chore at all, as Barney was used to being toted around to local pet stores on adoption days.

“Mr. Bolton, you may want to invest in a new carrier for Barney. The latch on that door is kind of cranky. Sometimes, if Barney pushes hard enough, he can open the door.”

“Thanks for the warning. Mrs. Buckley, I'll look into that after Christmas. Thanks so much for everything. My wife is going to love Barney! She always had dogs as a child and Barney is going to be a perfect fit in our home.”

“It's not trouble at all, Mr. Bolton. I'm always glad when a lab beagle finds a forever home. Barney is such a joy, I'm sure he'll fit right in your family.  A lot of our adoptive parents re-name their dogs. Do you think you'll give Barney a new name?”

“No, Mrs. Buckley, somehow Barney seems a perfect fit for him. Thanks so much, again. A very Merry Christmas to you and your family”

With that, Jason put Barney's carrier in the back of the Jeep and headed off for home.  As he was headed towards the state highway, he had heard on the AM news station that he was listening to of some major construction delays. “Who does road work on Christmas Eve?” he thought to himself. At that he decided to take one of the parallel running back roads.  He thought it would probably save him a half hour or so in delays.

He turned on the VHF radio and put it on scan. Maybe he'd hear an interesting conversation or two to pass the time on the way home.  The drive home was going smoothly when all of a sudden, he noticed a car, off in the distance, coming in his direction, and driving erratically. The driver was weaving in and out of the lane. “The guy's probably drunk from some office Christmas party.”, Jason disgustedly thought to himself.  Jason flicked on his high beams and sounded the horn to warn the oncoming driver that he was now in Jason's lane. Coming straight at him, and dangerously fast, it was all Jason could do to jerk the wheel to get out of the way. He had avoided a head-on collision, but in doing so, had hit an icy patch and skidded off the road into a culvert.  He banged his head pretty badly against the side window in the process. All he could see was the world somehow weirdly upside down, and the air bags deploying, as he blacked out. 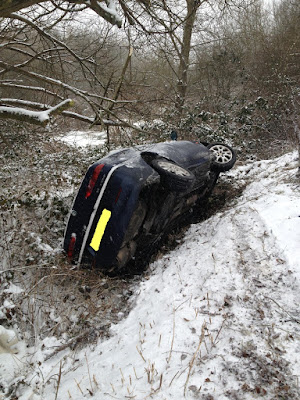