Spacing - the most important thing.

I don't know about you guys, but for me, "written" Morse is almost impossible for me to decode. Someone posted this to one of the Amateur Radio groups that I belong to in Facebook: 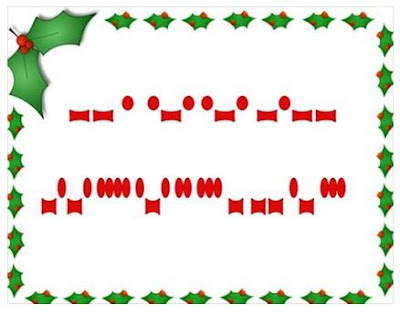 It took me a while to figure out that this said "Merry Christmas". At first, I thought it was starting with a "g" - to me the spacing was off. So. of course, I had to comment - which I shouldn't have done. I always get in trouble when I comment.  I posted, "Same to you, but your spacing is off.". Which probably went over like a lead balloon.

So the person came back a little later with: 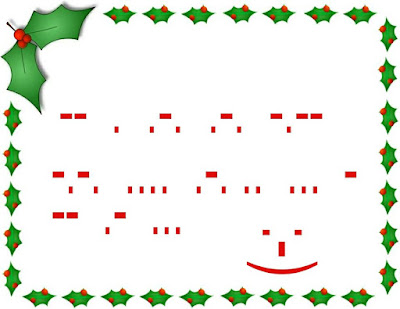 Which to my eye was a whole lot better. Morse is hard enough for me to "read", but when it gets jumbled up, it makes it even harder.  But then someone posted this:

"It was great the first time also. A good CW operator can copy no matter what the spacing of the characters. Thanks for sending."

Really? Wow - then I am definitely not as good a CW operator as I had thought myself to be.  To me, spacing is everything. If the Morse is "run on", whether it's typed or pounded, then I can't read it and I can't copy it aurally, either. I wonder .... am I alone in that?

So here's a question, a hypothesis for you, if you will. Feel free to comment, The gentleman who posted that comment may have a very valid point. Have we (I) gotten spoiled by keyers and paddles? Do we (I) expect more "perfect" code than we used to get in the days when straight keys and bugs dominated the landscape?  Have our ears (at least maybe my ears) gotten to the point where they're spoiled by perfectly produced electronic dits and dahs?

Maybe back in the days when almost everyone was mechanically sending Morse Code, it was easier to decode a fist that was less than perfect - because less than perfect was the norm. Spacing as well as the length of dits and dahs was all over the place and ears were used to copying Morse sent "all over the place" - especially on the Novice bands  In fact, this is how we came up with the concept of someone's "fist". Do you think this is a reasonable theory? That a really good CW operator should be able to copy a variety of fists, even lousy (sorry!) ones?

I think I can do that, at least I used to think I could do that, but I have to admit - when the spacing is terrible, and sometimes it is, I am at an utter and complete loss. If I hear Morse that soundsmorelikethis,allditsanddahsrunningonwithoutanyspaces - then it's as hard for me to copy as it was for you to read that last little bit. And to be honest with you, if it's that bad, than I simply would rather not even try. I hope that's not perceived as uppity or condescending - it's probably more of a lack of ability on my part. I marvel at the stories of the "pros" who could copy Morse at 40 WPM while making coffee, eating breakfast, walking the dog and chatting with the mailman.  I'm lucky if I don't get distracted by a mosquito or an itch or the urge to sneeze - all of which can totally mess me up. I wish I was that good - sadly, I am not. Maybe I'm just getting old, and my powers of concentration are not what they used to be.

Anyway, skipping to a different topic, I had two nice short little "ragchew" type conversations during lunch today.  One was with Mike WB0AGU near Kansas City, MO and the other was with David N4IVE in NC. The QSO with David was 2X QRP. He was using an OHR homebuilt kit radio to a full sized 20 Meter loop antenna. His 3 Watts was coming in like gangbusters. I told David that I used to have the OHR 20/40 and thought it to be an excellent radio. OHR offers good stuff.

Then David asked where my OHR went. Truth be told, it was sold to provide financing for other radio purchases. Another point of wondering ..... I wonder how many of us (if any of us) are lucky enough to have every radio ever purchased?  I think the norm is to buy, sell and buy up - at least that's been my experience. How about you?