This was something I tried back in 2013.  "Interviewing" accomplished QRPers and posting their thoughts here.  I stopped it for a while due to a lack of response from some people that I had asked to be interviewed.  I am going to give this another shot, as I feel it's an interesting and worthwhile project.  I originally intended a different spotlight each month, but I am going to try and shoot for one each quarter of the year.

I'm a firm believer that we all can learn from each other and that is one of the main purposes of this blog - not only to let me gab on and on and on until you get sick of me - but I also hope I am imparting some knowledge or at least a few good tidbits along the way.

This interview was done back in 2013, but was never published. Our guest this month is Ann Byers, K1QO.  I met Ann several years ago through the QRP Fox hunts.  Not only is Ann a superb human being, she is also an accomplished CW operator and a QRPer.  Since this interview, Ann has gone on to become a licensed pilot. She has a wicked fist and not only have I heard Ann in the QRP Fox hunt pileups, I've also heard her in contests. I guarantee that she can go toe-to-toe with any of the best!

So without further ado - our guest, Ann Byers K1QO. 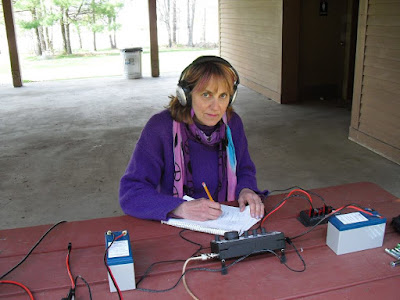 1) How did you first become interested in Amateur Radio?

My first introduction to ham radio was at the home of a friend when I was in the fifth grade, her dad was a ham.  I thought radio was magic. He had a tower on the side of their house in Haverhill, Massachusetts.  The idea of being able to communicate to another station so far away made a huge impression on me.  We moved away and I lost contact with my friend but I knew ham radio was something I would try at some point during my life.  I drooled over the crystal radio kit that I saw in Radio Shack a year later, and asked for it as a Christmas gift but back then little girls were not encouraged to build radios...glad times have changed.  Almost 4 decades later,  after turning 50 years old, I had some extra time to dedicate as study time to get my ticket and start the road to learning code.

I've always been impressed with what low power,  CW, and simple wire antennas can do.   I get a major thrill out of 5 watts to New Zealand or participating in the last NAQCC mW contest and logging over a dozen contacts in an hour running 900 mW...it just doesn't get any better than that in radio.   I've never wanted to own an amp, for what I do in the hobby I don't want to use a megaphone to talk to someone across the table from me when I can be heard using  a quiet voice. 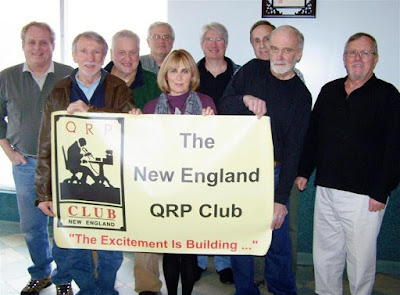 4) Who has been your biggest QRP influence?

Besides my patient and wonderful Elmer, N1IX,  I have to say the QRP Foxhunt Group and a lot of the folks from New England QRP Seacoast Chapter have been major forces in keeping me alive in the hobby...it's been a much steeper learning curve than I ever expected but I've had help and support every time I hit snags and that's thanks to the QRP community.   The QRP Fox Hunt group has some of the best and most supportive op's in the hobby!!!!  I had been licensed for about a year when I started in the QRP fox hunts during the 2004-2005 winter season.  It's impossible to name just one person who has had a major QRP influence on me because being new in the hobby I still have so much to learn; N1IX is a wonderful Elmer.  K4BAI a CW Olympiad who supports the hobby 1000% and who I admire as the ultimate team player has been a constant source of inspiration and awe.  I must also include:  N9NE, (exceptional op, has given me loads of tips, suggestions and has been a great source of mobile advice/experience), W2LJ a great friend, FB op, and his blog is a constant flow of what is happening and what can be done in the hobby, WC7S, incredible motivator, antenna guru, K9CW, another great team player and exceptional op who will go the extra mile for new folks, K9JWV, always great moral support and has given me lots of  super advice,  N0UR, the MN QRP contesting phenom who put up with a mW Facebook Fest, as he did fox duty,  a true showing on how great an op can be and how effective QRPp can be, that gave me guts to try QRPp.  N9AW is probably a major game changer for a very large group with his creation of the Facebook QRP FoxHunt group...it's created a new dimension and sense of camaraderie that I truly enjoy.  K3WWP is also someone I admire and has been a very positive influence...NAQCC has a huge membership and wonderful contests. K7QO has been a continued source of help with the books he's "translated" to CW...his IPad app is great tool and can be used to set for just about any speed.   At the top of the table locally W1FMR, the founder of New England QRP Club, W1PID for inspirational outdoor operating adventures and K0ZK for his incredible spirit and technical know how, Arn is a treasure.  KD1JV for his wonderful, portable kits, light weight and his vision of the ultimate in a trail rig...it just makes you want to go on a hike and operate!!!  There are many others who have influenced me in the hobby as well.

5) What is your favorite QRP activity?

I enjoy the QRP Foxhunts, low level contesting and chasing DX, they are all fun and it's a good way for me to keep trying to improve my CW skills.  Operating outdoors has always been a blast I hope to do more in the future.

6) What's your favorite piece of QRP gear (past or present)?

8) What is your fondest QRP memory.

There are a few, probably the best memory I have is my first two-fur in the QRP Fox Hunt, the foxii were K4BAI and N9NE...it was in early December, 2005 and I was having a tough time, I had breast cancer surgery and was going through radiation...after getting the two-fur I did a dance around the living room!!!!!  The other memory I have is a funny one.  Early in my start as a ham N1IX was trying to teach me to work split on the K2 I had just built.   By accident I transmitted on the transmitting stations frequency, he was working up one...I messed up setting up split I was so embarrassed I wanted to shut the radio off and quit trying.  N1IX told me, "don't worry, that's the great thing about QRP, no one can hear you".   He was joking but I believed him, I didn't know so I stayed on the air...wow I would learn very quickly how funny that comment was.  I won't fall for that joke again, but I still accidently transmit on the transmitting stations frequency, so does everyone...hopefully I won't do it often and hopefully either someone will let me know I'm accidently doing it or I'll realize quickly that I'm making a mistake. 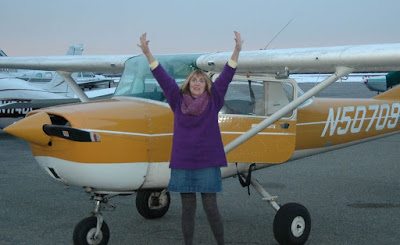 9) What other hobbies/interests do you enjoy when your not on the radio?

I love my dog, a Border Terrier named Kally, enjoy hiking, play golf, swim, solar energy and have a small flock of chickens for fresh eggs...they are all named so they will never be on the dinner table.

Email ThisBlogThis!Share to TwitterShare to FacebookShare to Pinterest
Labels: Profiles in QRP