The weather outlook for an NPOTA activation or two on Saturday is looking good.  While a lot of the Northeast is bracing for a major hit of snow tomorrow, we're supposed to get only rain in Central NJ.  It's supposed to clear out Thursday night into Friday and Saturday is forecast to be sunny and clear with a high of about 38F (3C).  Chilly, to be sure - but warmer than my first activation of TR23 last January.

I have a commitment at 5:00 PM, so if I'm going to do two activations, both HP28 and TR23, I am going to have to get an early start.  If all goes according to plan (and when does THAT ever happen?), I hope to be out of the house by 9:00 AM and up at Morristown National Historical Park by 10:00 Am or thereabouts.  I am planning on bringing the magloop and giving it a full blown workout.  Of course, the Buddistick, Hmastick and my normal arsenal of end fed wires will come along for the trip, too.  No sense in leaving home the antennas that you brought to the dance with you before.

TR23 and HP28 come together for a 2-fer from one small part of the park. You can see the trail in the following screen shot - it's represented by the red line. 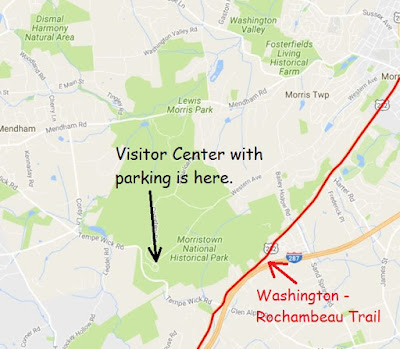 It's hard to be IN the park and still within 100 feet of the trail. As you can see from the map, there are no roads which lead to easy access of TR23 from within HP28 by car.  All the service roads in the park are more that 100 feet away from the trail; and to be honest with you, I don't have the luxury of time for going for a hike.  So in keeping with being on the up and up, I will probably do them separately.

Now here's something I just learned today which is fascinating.  I always knew there were two parts to the trail, where the two Generals split up for a bit before rejoining up.  Trail One is the one that General Washington took and is the one that runs close to my house that I've activated twice already.

Trail Two is the one that General Rochambeau used. This one runs right through Washington Valley Park which is also the site of the Middlebrook Encampment, where Continental Army troops wintered and where the first United States flag ever flew.  In fact, the Middlebrook Encampment is the only place in the United States, where by an Act of Congress, that the original 13 star "Betsy Ross" flag is officially allowed to fly 24 hours a day, 365 days a year. 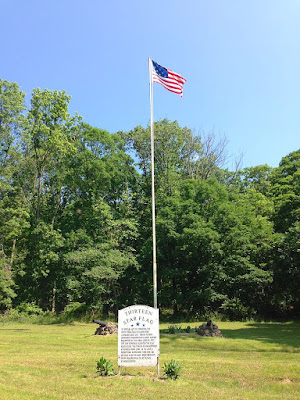 Ambitious plans usually get messed up for me. We'll see what happens.