Yesterday, we had a work detail at the Middlesex County Fire Academy, where I volunteer as a RACES operator.  Our goal for the day was to assemble our UHF/VHF Go Kits, put them on the air, and make sure the antennas were marked, so that when they're deployed by the various municipalities in the county, that the SWR will be optimal.

As I was putting the kits away in the storage room, which is tiny, I heard a strange noise. I wasn't aware of what it was until I got in the car to come home.  I had my Wouxun UV8D on my belt, and I was navigating the storage room, I was unknowingly rubbing the face of my HT against the cinder block wall. 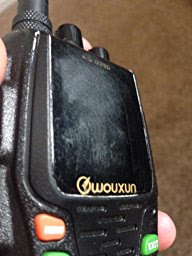 It was nowhere near as bad as the above picture that I found on the Web, but there were a few noticeable, long scratches.

When I got home, I went into one of our bathrooms to see what kind of toothpastes we have. I use AIM, which is a blue, minty gel (and is cheap); but my daughter uses Arm & Hammer Extra Whitening, which is a standard "white" toothpaste.  I put a tiny dab of that on my finger and made continual circular motions across the HT screen while slowly counting to 100 in my head.  I cleaned off the toothpaste with a paper towel and was happy to see the scratches were almost gone!  I repeated the procedure once more, and now the scratches are 99% removed. You can still see them slightly, but you have to know that they're there and you have to look for them.

So if you ever scratch the display of your HT (and it's not a touch screen), don't despair. A few minutes of your time and some toothpaste will fix that right up.