As Howie Rose, the broadcast radio voice of the NY Mets says, after a baseball victory  .... "Put it in the books!"  Another Field Day has been relegated to the pages of history.  For better or worse, with all it's trials and tribulations, frustrations and failures and successes, you just have to love Field Day! 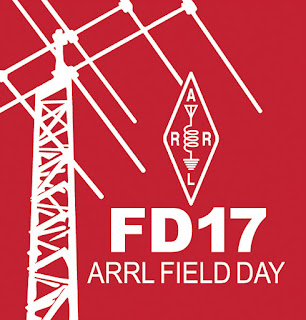 As Saturday dawned, the outlook was none too good.  First, a little background.  Our house is older, having been built in the 1920s, according to the inspection report we had done as part of purchasing it, back in 1998.  As such, the concept of air-conditioning was unknown back then,  Central air was installed sometime before we bought the house, but it's an older one zone unit.  The thermostat on the main floor controls the entire house.  The bedrooms are on the second floor, so in the Summer, that floor is a bit warmer than the rest of the house.  Each of the three bedroom has one of those cylindrical room fans to help keep the comfortable during the warm months.

"What's that got to do with anything?" you may be asking yourself.  As I awoke Saturday morning at 6:30 AM, I heard something just a bit louder than the hum of the fan.  It took a few minutes for my groggy brain to figure out what it was. Rain!  It was coming down in buckets - as Bob W3BBO would say, it was a real gully washer!  I only heard one or two rumbles of thunder, but the National Weather Service is currently in Howell, NJ (which is all of about 15 miles or so Southeast of me) investigating whether or not tornadoes had touched down.

This was not an auspicious start to Field Day weekend.  Before I could head out to the field, I had a few chores and the grocery shopping to do, so I got those done, first.  As fortune would have it, as I was in the check out line at the grocery store, about 90 minutes later, I happened to look out the window to see bright sunshine and blue skies!  It looked like Field Day was going to be a bit soggy, but at least dry for the balance.

Taking care of the last home and family business, I loaded up the Jeep with the things that I needed to; and I headed out for Spring Lake Park just a few minutes after 10;00 AM.  Yes, the ground was soaked, but it wasn't muddy.  It ended up being a minor inconvenience and not an impediment.  Set up went rather quickly with only a few "Murphy incidents", but as this was NJ2SP's fourth Field Day effort, all became pretty much routine. 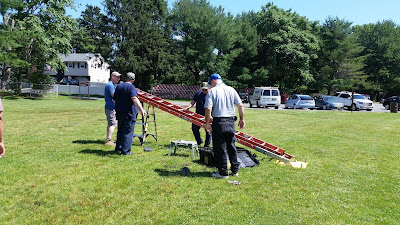 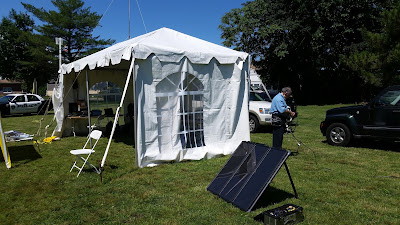 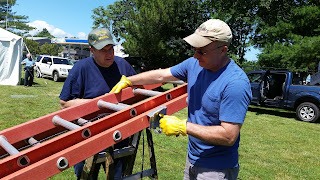 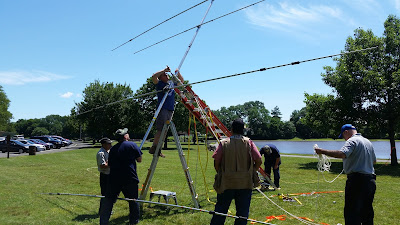 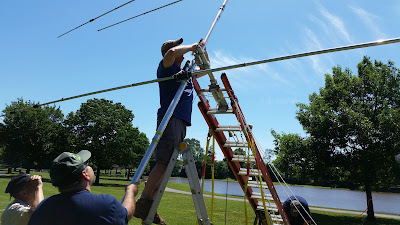 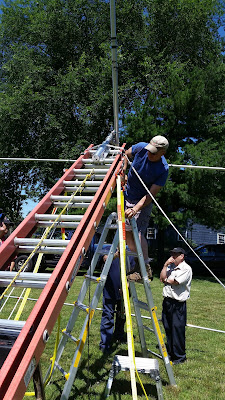 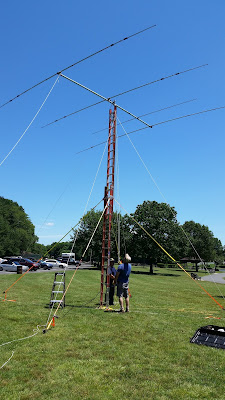 After helping to build the beam, I got busy with other antennas as the "tower" was being loaded and raised.  It took a while to figure out the logistics, but I got Marv K2VHW's G5RV up in the trees for the CW station.  The beam was for the SSB station and our third HF station was hooked up to Dave KD2FSI's 80 Meter Inverted Vee.  I didn't get a photo of it. I will next year. The base for the 80 Meter Inverted Vee is a small cargo trailer that hitches to the back of KD2FSI's van. It supports a 30 foot (or so) collapsible mast, which in turn supports the wire. This innovation that Dave came up with is perfect for Field Day and other portable ops situations. The VHF/UHF stations and the GOTA station were hooked up to other antennas.

As it approached 1:00 PM local time, with an hour to go, Dave and I got to setting up the equipment that would be used for making the contacts.  Ron N2LCZ performed his IT magic once again, and had set up a small LAN (oxymoron - "small LAN" .... think "Jumbo shrimp" Heh.) so all our logging laptops could be connected to one desktop which served as our logging server.  This was the only thing we use commercial power for, the entire weekend.  The Field Day rules state that as long as the computers are not connected to the radios, by any means, and are not in any way, shape or fashion used for controlling the radios, then you can hook those up to commercial power and not lose your status as having operated on emergency power.  The gas station next to us once again allowed us to hook up an extension cord to one of their outlets, powering up our computer system.

At 1:45 PM we were ready to go.  The Elecraft KX3s were at the CW and 20 Meter SSB stations.  KD2FSI's radios were at the third HF station as well as the VHF/UHF station and the GOTA station. We were hoping for some good 6 Meter openings at some points throughout the weekend.  As I turned on my KX3 for the CW station, I was presented with a horrifying situation.  Marv's G5RV was giving my KX3 fits.  It would load up fine on 40 Meters with an SWR of about 1.3 to 1, but on both 20 and 80 Meters, the best match the KX3 could get was about 6: to 1.  That was simply unacceptable and I wasn't about to waste time trying to figure the situation out with only minutes to go.

My brain immediately kicked into backup mode and I decided to go with the antenna that so bravely performed at out very first Field Day back in 2014.  EARCHI to the rescue!  I shot another line into the tree that was already serving as one of the G5RV endpoints and got the EARCH endfed up, posthaste.  I didn't even bother with mason's twine and a tent stake.  We set the antenna launcher in a safe place on the ground (so it wouldn't get run over or bumped into) and it and the monofilament fishing line held the end fed up, all weekend long.  The KX3 was a happy camper, with the autotuner providing a good match on all bands. That included (more or less) 160 Meters, where I was able to make a couple CW contacts.

Oh, and by the way, the coaxial stub filters worked flawlessly!  I installed them on the CW and SSB stations and there were no interference problems all weekend long.  Dave KD2FSI and I also took more care to pay attention to antenna placement this year; so that also helped.  All the radios were able to be manned all weekend long without anyone having to stay off a band for any particular time because of hearing CW or SSB artifacts coming through from a neighboring radio. A tip o' the hat to W3BBO for directing my attention to the use of coaxial stub filters.

The highlights of the weekend included the Mayor and members of the Town Council paying a visit on Saturday afternoon.  Our ARRL Section Manager, Steve Ostrove K2SO came by Saturday evening for a visit. 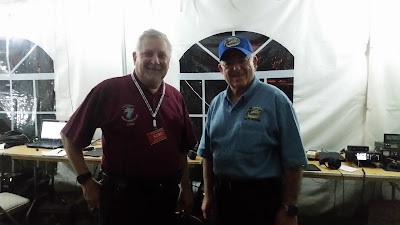 This year we had the most public interest that we've ever seen, with people coming by expressly to learn about what Amateur Radio is and why we were there.  Some parents brought their children to see what Amateur Radio is all about, expressly because of its special relationship to STEM.  We also had a few Scout Leaders from both the local Boy Scout and Girl Scout troops come by to ask us if we would come to troop meetings to give a more hands on demo of Amateur Radio.  We were happy that the Middlesex County RACES Bureau Chief, John Garmendi N2DV came by for a visit, so that he could see that the Radio Amateurs from the town of South Plainfield are ready and able to assist in any way needed, should the situation ever present itself. 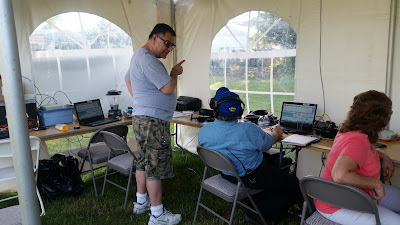 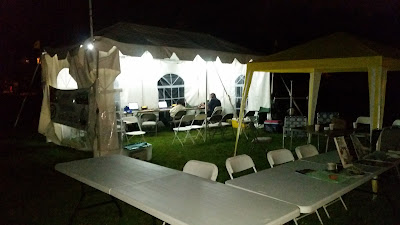 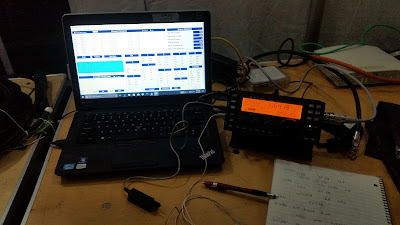 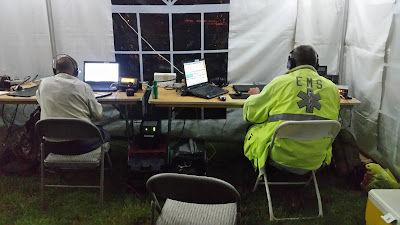 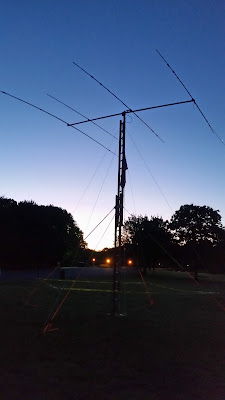 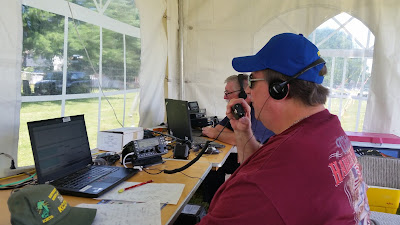 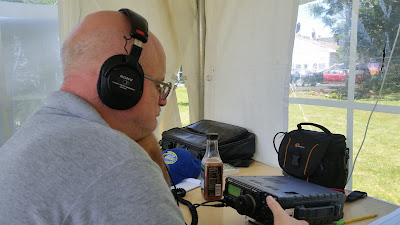 The stations hummed this year, throughout. Again, thanks to KD2FSI and his antenna analyzer, he was able to tune the beam and the SSB station was able to go great guns.  The SSB QSO total came close to the CW QSO total for the first time this year we were able to come close to a 600 QSO total. It did my heart good to be able to look over to the SSB station and watch the guys make one contact after another and actually enjoy operating SSB QRP instead of being frustrated by a balky antenna.

Some of the newer Hams that we were privileged to either instruct or test, came by and actually spent some time behind the microphone. It's a good thing to watch them get on the air and actually start to enjoy their operating privileges. It's one thing to teach, it's another to test; but it's another gratifying experience to watch new Hams get their feet wet and become more comfortable with Amateur Radio. I will not be surprised in the least if they're back next year, not for only a few hours, but for the whole shebang.

Dave Vadney W2OIL and Dan Vadney KC2YRC from our sister club, the ETS of NJ, came by and stayed with us for a large portion of the time,  Once again, they were humongous helps during set up and tear down and on Saturday evening, they supplied us with the most fantastic home made meatball sub sandwiches for supper. And this year, they both got the chance to operate, too.  It was nice to see them actually get a chance to sit behind the microphone, play radio for once, and get the chance to add to our QSO total to boot.

As usual, ever since my Piscataway Amateur Radio Club days, I stayed the whole 24+ hours with the exception of a break for Mass attendance (some things are even more important than Amateur Radio!). As it got late through the night, and into the wee hours of the morning, I took a few breaks to get away from the key for a few minutes. Never for too long, though, because the mantra that kept playing itself over and over again in my head was, "The contacts aren't going to make themselves.", and that kept me going.  Marv K2VHW who is normally the co-operator of the CW station had some issues that kept him away from the key for his normal amount of time.  I tried to take up the slack by myself as much as I could and I think we came close to hitting our normal CW total for this year.

I got all of about two hours sleep on Sunday morning, finally just crashing out on one of the camping chairs.  Last night I slept the sleep of the dead and I'm still pretty groggy and useless this morning. I'm on my second cup of coffee (in which I seldom indulge, but is a necessity today), but I'm pretty happy with the results of the weekend.  We made a record number of QSOs by far this year, with SSB station finally doing what it should have been able to do all along - and all were made with 5 Watts or less. A good time was had by all, and once again, some new friendships were made and a lot of older ones were solidified.

Thank you God, SPARC, ETS of NJ and friends for a fantastic Field Day weekend!

(My apologies for any typos and for any disjointedness in the writing of this post. Even after getting a bit of sleep, Monday morning is a "rough go".)

As the day goes by and I am returning to somewhat normal, I am horrified by all the spelling and grammatical errors that I see that I have made and am correcting them. However, I'm still glad that I posted while all of this is still in the "Very Fresh" memory bank.