One of the "pillars" of the South Plainfield Amateur Radio Club" is to establish an outreach to the youth of our local communities, in order to get them interested in Amateur Radio, and electronics in general.  To that end, we've given demos on Ham Radio to local Scout Troops, and we've participated in JOTA, among other activities.

We've been approached to participate in a Maker Fair in early March in nearby Piscataway, one of our neighboring towns. To that end, we've decided on constructing a small electronics kit that will allow the youngsters to get hands on experience with kit building and soldering.  My fellow QRPers would call this a "buildathon". 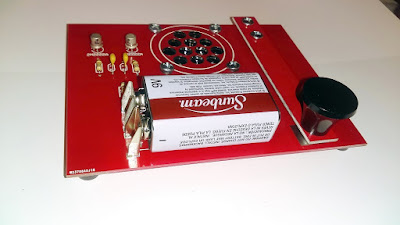 As you can see, the number of parts is small, so the kits won't take too long to assemble.  And at the finish, each attendee will have a functioning code practice oscillator (there IS a method to our madness!).  We hope to purchase 20 kits and get them all assembled over the 4 to 5 hour period that this will last.

Each builder will have an experienced Amateur Radio op right by their side to show them how to stuff the circuit board and the proper technique for soldering.  While we're hoping they'll do most of the work and have most of the fun, we'll be there to make sure no one picks up a soldering iron by the wrong end, or hurts themselves in any way, for that matter.

At the same time we'll have a PC with some Morse Code decoding software running, so that the kit builders can try out their newly assembled oscillators, as well as their fists. We'll also have video running that Alan W2AEW (of YouTube fame) will be making for us, showing how this kit is built. Hopefully this will really pique the interest of the builders who will be patiently waiting their turn behind the soldering iron.

Thanks to the 4 States QRP Group for making available reasonably priced kits that can be used to spark the electronics/Ham Radio bug in the younger crowd.