My kindle is on fire!

Not literally, but I've been using it a lot lately.  I've had my kindle Fire for about 3 or 4 years since my wife gave it to me as a Christmas present.  I have always used it for reading books, but it took a back burner to Samsung tablets, which I seemed to prefer. 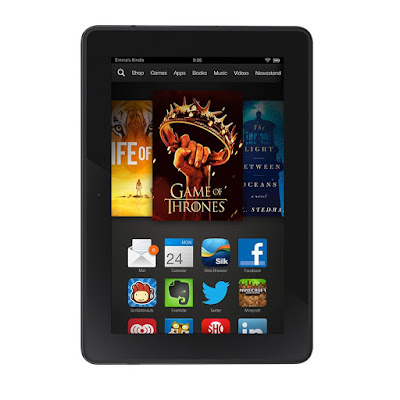 That changed recently when Marianne's tablet gave up the ghost. Instead of going out and buying a new one (it happened just AFTER Christmas, isn't that always the way?), I did a factory reset on my Samsung Galaxy 4 and gave it to her to use.  Since then, I've been concentrating on using the kindle.

In addition to all the books I already had on it, I've added more Amateur Radio stuff:

1) The Radio Boys books
2) The QST app (which I didn't know you could get on the Fire - I was pleasantly surprised.)
3) I renewed my subscription to CQ through the Amazon magazine app.  The Fire doesn't support Zinio, which is what I was using on the Galaxy. The neat thing is that, while Zinio never sent out a notification when my CQ subscription would run out, the Amazon app will auto-renew until I tell it to stop. No more missed issues!

I use the kindle at work every day for listening to music via Pandora. It has rich, Dolby sound that is far superior to the sound coming out of the Galaxy.

Yeah, using the kindle as my primary tablet device has its downfalls. There are a lot of Android apps it won't support because of conflicts with Amazon. But I have the important Amateur Radio related ones on my phone - so no problem there. And by resetting the Galaxy and giving it to Marianne, I've gotten rid of a lot of useless junk that I was accumulating over the past few years.  This is yet another case where "Less is more". Appropriate for a QRPer!