Saturday got away from me again. Too many chores and errands, not enough time for radio. QRPTTF will have to wait another year for participation from W2LJ (as is that even matters).

From the summaries and reactions that I have been reading on QRP-L, it looks like the QSO rates were quite light for those who took part. Some have reported only 4 or 5 contacts for the entire event. Band conditions were pretty bad to say the least; and was probably the main reason for this.  Related to that, I saw on Facebook where Mike KC2EGL posted that he and John K3WWP only made 15 contacts during their subpedition to the USS Requin yesterday. I guess band conditions were lousy both days.

Personal experience would tend to back that up.  Yesterday afternoon, I got a few free moments and decided to set up the KX3 and magloop on the back patio. It was sunny and 65F (18C) and sitting in the sunshine, it actually felt much warmer. I haven't used the loop in a while and I kind of surprised myself how adept I've become at tuning it. I heard some loud signals on 40 Meters, though far and few between. 20 Meters was even worse. Any DX that I heard at the low end of the band was way down in the mud and was hard to hear. Stations from Slovenia and that area of Europe usually boom into NJ that part of the afternoon. Yesterday I had to strain my ear bones to hear them.

I called CQ for a bit on both bands for a few minutes before the battery that I was using went down below 8 Volts and caused the KX3 to turn off.  I guess that was just as well; because from the RBN chart, I wasn't being heard anywhere very well, anyway. 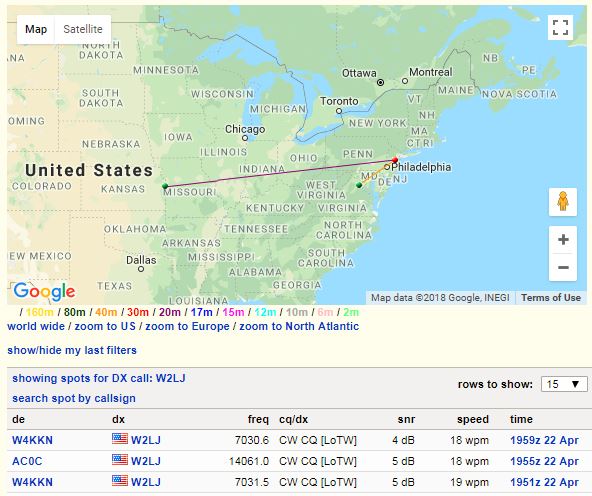 I saw in one post to QRP-L that Rick N9KG and Jerry N9AW were discussing that during the lower end of the sun spot cycle that "all day" QRP events might be better served by turning them into 3, 4 or even 5 hour sprints. The idea being to concentrate the participation and activity into a smaller time frame so that the experience becomes meaningful for all those involved.

Off hand, I'd say that's a pretty good idea. It keeps interest in the event alive from year to year when people feel that they've had a modicum of success. If you've made 20, 30 or 40 or more QSOs, you're more likely to make an effort to go out and conduct a portable operation again the following year. No one wants to go through all that trouble only to have it become an exercise in setting up and tearing down. When the sun spots come back in plentiful numbers, you can always adjust the hours of the event to reflect that.

Just a thought; and if I daresay, a good one on the part of NK9G and N9AW - two avid veteran QRPers whom I both respect, very much.