This past Labor Day weekend was pretty busy, between sorting out the Skeeter Hunt results, composing the Soapbox pages and volunteering with OEM for crowd control at South Plainfield's Labor Day Parade and fireworks display. (How's THAT for a run on sentence ?!?)

So my dimensions departed quite a bit from what the QRPGuys have listed in the antenna construction manual, as I didn't feel like cutting the PVC - I used the entire 3 foot length. 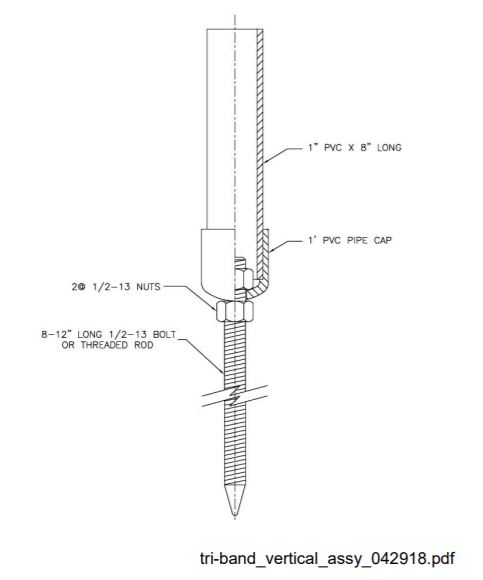 I'd sure like to know where they secured a 17' fishing pole that would fit into a 1" diameter piece of PVC !!!  Anyway, I made my "spike" out of 1/2 threaded rod. I cut a piece about 2.5 feet long (the heck with 8-12 inches!) and got out the Dremel to grind myself a pointy end.  I secured the other end in the cap using four nuts, two on each side.

I took it outside and was surprised how easily it went into the soil. When I use the Jackite holder which is PVC hose-clamped to a piece of angle iron, I really have to pound on that pretty hard. This went in like a hot knife through butter, by comparison.

The mast holder seemed to do a decent job, even on a mildly breezy day. I didn't deploy the actual antenna, but the four sloping radials will double as guys to hold everything securely. The mast and antenna probably come in under two pounds combined, so they probably don't offer much wind load. In other words, I don't see the likelihood of them falling down a lot.

I want to deploy this antenna for the NoGA Peanut Power Sprint later this month. I saw on Facebook where Steve WG0AT used the same on a recent SOTA deployment and he seemed pretty pleased with it. And if it's good enough for the Grand Master of Portable Ops, then I'm pretty sure it will be more than sufficient for me.