I was shocked last night, when I saw a post to the Flying Pigs Facebook page by Brian KB9BVN, that Ken WA8REI had become a Silent Key. 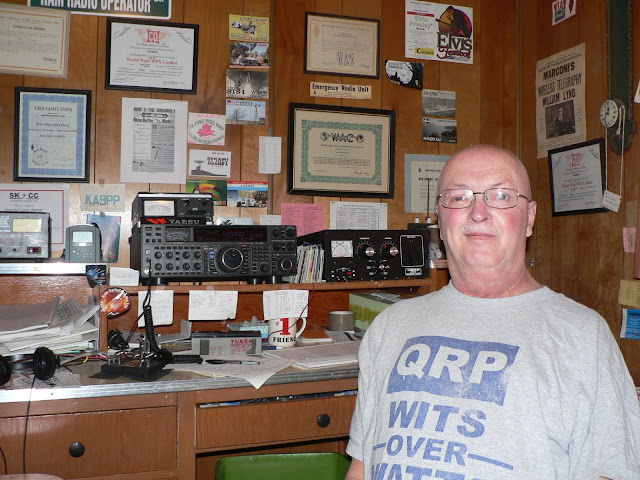 Ken, being the avid QRPer, had contacted me many times over the years in QRP Sprints and just plain old QSOs.  I particularly enjoyed when we would rag chew when Ken took his RV to the Upper Peninsula in Michigan and he would tell me how cold it was; or how much snow was on the ground, or how beautiful the foliage was in the Autumn.

Ken introduced me to; and got me involved in the QRP Polar Bears, where another SK, Ron  WB3AAL was also quite active.

It was always a treat to run into Ken over the years and his call sign appears in my log many, many times. I will miss the cheeriness and friendliness that he was able to pass on - even through his dits and dahs. Ken was good people.

Ken was a life-long resident of the Saginaw area. After graduating from Buena Vista High School in 1965, he entered Western Michigan University and obtained a bachelor’s degree in sociology. Ken served in the US Army from 1970-72 and was stationed in Stuttgart, West Germany where he was assistant to the Chaplain. Upon his honorable discharge, he was employed by the US Postal Service from 1972 to 2002, reaching the level of Mail Processing Manager at the Saginaw USPS facility.

Ken had a strong Christian faith and was past member of Sheridan Avenue United Methodist Church, Auburn UMC, and presently was a member of Hopevale Church. He enjoyed the Christian fellowship of all members at these houses of worship.

Ken was a gifted keyboardist from his youth and throughout his life. Ken was organist at Auburn UMC and part-time organist at Sheridan Avenue and Swan Valley UMC over the years. Ken also taught piano from his home. Even after a stroke at age 60 rendered his left hand paralyzed, Ken still played his electronic keyboard, recording and sharing his music, which were often arrangements of favorite hymns. Ken also played the dulcimer.

Ken loved his Lord and his country and was proud of his service in the Army. He enjoyed traveling our scenic country, either in his RV or Tahoe, often stopping at the homes of relatives or his ham radio buddies. He loved nature, and loved visiting relatives whether they were in Saginaw, Mayville or Florida.

Ken’s favorite hobby was amateur radio. Licensed in 1965 as WA8REI, he was very active on the air until his death. Ken loved to operate his radio, using Morse code, from wilderness areas as well as from his home. He made loyal friends on the air all over the world.

Ken was predeceased by his parents, Ferris and Donna Louks. He is survived by his brothers David (Kathryn) Louks, Paul (Vicky) Louks, a dear aunt G. Elaine Fox, and many treasured nieces, nephews and cousins.

Honoring Ken’s wishes, there will be no formal funeral service. His wish was for his friends and relatives to remember him in their hearts and give all thanks and praise to God for our time of grace. Also per Ken’s wishes, he will be cremated, and his remains interred at Great Lakes National Cemetery in Holly, Michigan at a later date. Those planning an expression of sympathy may wish to consider Hopevale Church of Saginaw

73, Ken!  May you always have good DX and great propagation - RIP, my friend.