My best friend since high school, Donald Jakubowski, posted the following photo on my Facebook timeline yesterday. It must have been from one of the many times when he came over to my parent's house to visit. 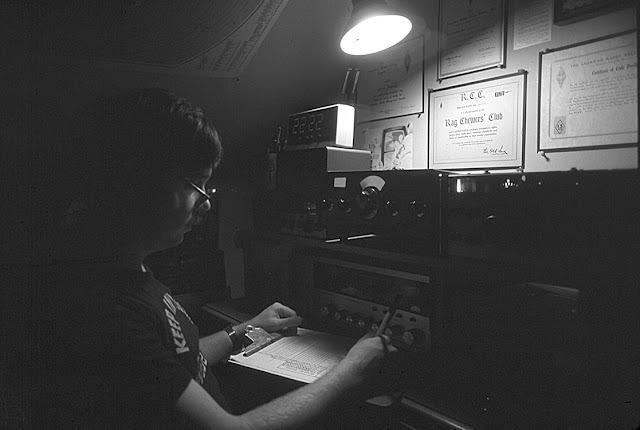 The lighting is what we would call in the photographic world as "low key". Usually a single light source and a lot of deep shadow and drama. The light source here is the desk lamp.

This was taken, in what I would guess to be 1980. It must have been in the late fall or winter, because if it's dark enough at 2222 UTC to have a desk light on, it must have been pretty dark outside at 5:22 PM local time. . I was working at the North Brunswick Camera Center at the time. I was wearing one our store's signature "Keep on Clickin"" t-shirts. I can make out that, at this point, I was beyond my initial Novice station. That's definitely my Heathkit HR-1680 receiver, but to the right of it would appear to be my Kenwood T599D, which had replaced my Drake 2NT as my transmitter. The R599D would come very shortly thereafter. I did not acquire them both at the same time. When you're a young kid, working at your first "real job", you're not exactly rolling in dough. Stations got built, a piece at a time.

To the left of the Heathkit was my MFJ VersaTuner with a speaker on top of it, and a clock on top of that. On the bottom shelf was my Realistic DX160, which was my SWL receiver. To the left was its speaker. To the right of that was open space for whichever Morse Code key I was happening too use at the time.

On the wall you can see some meager wallpaper. My RCC - Rag Chewers Club certificate, and my W1AW code proficiency certificate. Only 13 wpm at this point, but that's what is leading me to believe that I had upgraded to General by the time this photo was taken. I think that's a copy of a Gil cartoon the the left of the RCC Certificate, behind the clock. Phil Gildersleeve, always was and always will be my favorite. Attached to the dormer, over my left shoulder, was an ARRL world map. Above and to the left of the RCC Certificate was probably my ARRL Membership Certificate, then something in between, and then my license to the right of that.

I was so surprised to see this! As much as I was into photography at the time, I never thought of taking photos of myself, or of my pursuits. I was always taking photos of other things, and thus, I lack any documented personal history.