It was brought to my attention this week that my signal from my mobile VHF/UHF rig has been ..... crap lately. So I switched over from the antenna I was using to this little Comet dual band magmount jobbie. The difference became apparent to me immediately -as I was able to access a certain repeater that I had not been able to, for a while. I thought it was a problem at the repeater site .... stupid me!

So I began looking for a replacement in the DX Engineering catalog, and I decided on the Diamond AZ507RSP with the accompanying Diamond K702M mag mount. And then I really noticed the cover: 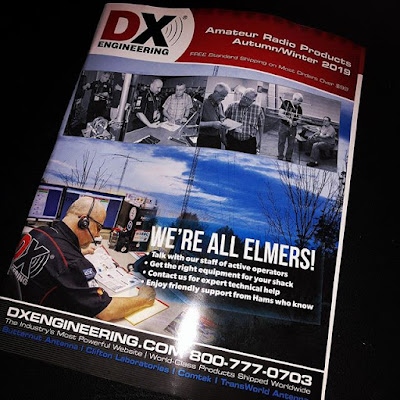 And it struck me, we ARE all Elmers; but not only in the classic way, that you are used to thinking about it.

You think of the classic Elmer scenario - an old timer takes a newbie under his wing and shows him the ropes. And that is something that those of us who have some experience should all do. But in thinking about it - the reverse is also true.  When you mentor somebody, don't be closed to the idea of learning a new trick or two from the person you are mentoring.

But in return, it has also been my privilege to learn from some of these new Hams. I have gotten new ideas and have looked at old things in new ways and have been inspired to try new techniques and methods from the very people that I have been "Elmering".

So don't be afraid to take the opportunity to be a mentor or an "Elmer". Don't ever think that you have nothing to offer; because I can guarantee you - you most certainly do. And don't be in the least bit surprised to find out that the person you are "Elmering" will be able to allow you to see things in a fresh, new way that you were never aware of before.