Persistence is a virtue that you will need in order to become successful in QRP. Admittedly, some days it comes easier than others - especially when Ol' Sol has some freckles on his face. On those days, it can seem like fishing in a barrel. On the other days when it's hard, you can choose to either walk away, or keep your fanny firmly planted in the chair in front of the radio.

There have been plenty of times that I have taken either course of action, but last night the 40 Meter QRP Fox hunt was a "keep your fanny firmly planted in the chair" kind of night. That was surprising, actually. When I turned on the KX3 about 10 minutes before the hunt started, I was greeted with a quiet noise floor. About S1 with the Butternut, maybe an S unit higher on the W3EDP.  My initial thought was "Oh boy, the Foxes will be easy to hear tonight!"

The first Fox that I was able to hear was Tim KR0U, or "TC" as he was calling himself last night. Tim says that T and C are his two first initials. However, I think that it should stand for "Top Cat" because he is such a superb Amateur Radio operator.  But I digress.

I heard hounds calling in the upper half of "the woods" so I began listening about a kHz down. Slowly, I was able to discern that it was Tim they were working. I waited until he got louder - first ESP, then a whisper, and then eventually workable.  At about 40 minutes into the hunt, I became confident that I would be able to hear him if he answered me. About 5 minutes later, I got into his log.

I hate useless calling. I define useless calling as calling the Fox when conditions are such that you would not be able to hear him/her answer you. Why bother calling at that point? Chances are you're only going to QRM some other hound who has a legitimate shot at that point. Courtesy dictates not shotgunning it blindly, and only trying when you have a real chance yourself. Too bad more people don't heed that advice.

Once Tim was in my pelt bag, I went down to the lower half of "the woods" to listen for Jerry N9AW in Wisconsin. There is usually a pipeline between NJ and both WI and MN. It seems I hear stations from those two states as if they were down the street. Last night, someone dug up the pipeline and threw it on the trash heap.

The only way I was able to tell where Jerry had situated himself was by tuning around and listening for hounds working him. Again, I found some and I tuned about one kHz down to listen for N9AW - this time there nothing, nada, zilch. It was as if Jerry was a submariner and had rigged for silent running.

At that point, it was nearly 10:00 PM local time. I was tired from a very long day at work. The temperatures outside were dropping like a stone as a cold front with Arctic air was rushing through and it was starting to become chilly in the shack. I was really, really, REALLY tempted to throw the Big Switch, and go to bed and get under the nice warm blankets.  But for some insane reason, I decided not to - persistence kicked in.  Stubborn, insanely optimistic persistence had kicked in. Half of my brain was saying, "This is hopeless, you're never going to hear him, go get warm!"  The other half of my brain was saying "Be patient and stay the course!" 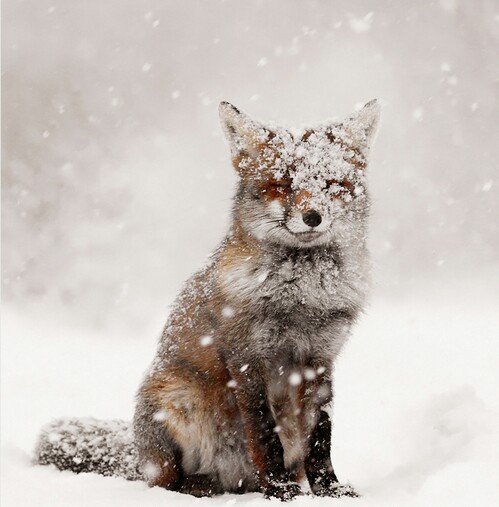 It turned out that listening to the latter half of my brain paid off. All of a sudden, with only about 10 minutes left in the hunt, propagation changed and Jerry popped out of the silence - and not just ESP, but loud enough to work  It was as if a curtain had been lifted, so I fired off my call a few times and I was pretty sure that I had grabbed the second pelt for the night. It was very difficult to be certain, though, as other hounds were calling him over, and over and over - right on top of me (Jerry was working simplex). Those last few minutes were like a shark feeding frenzy

Once the hunt ended, Jerry upped the Watts a bit and he sent "W2LJ UR IN THE LOG". I was thrilled to hear those dits and dahs! Thank you, Jerry and thank you stubborn, insanely optimistic persistence for keeping me in the chair!